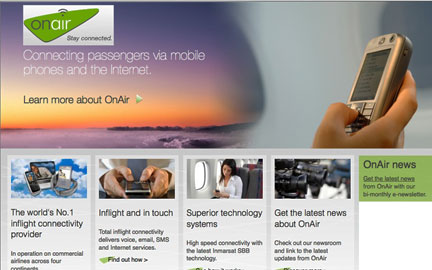 OnAir homepage
[SatNews] The results are apparently in... there seems to be more than enough capacity to meet air passenger needs...

OnAir's combined GSM and inflight Internet services have proven, after a successful first year of operation, that SwiftBroadband provides more than enough capacity to meet passenger needs. The combined Mobile OnAir and Internet OnAir services, first launched by Oman Air in March 2010, are also operating on Saudi Arabian Airlines and Egyptair. They allow airline passengers to use their mobile devices in the same way as international roaming or to tap into an onboard Wi-Fi hotspot. "We are seeing that people communicate during flights in exactly the same way as when they are on a train, in a taxi or at the airport," said Ian Dawkins, Chief Executive Officer of OnAir. Of passengers accessing the service, 95 percent use the GSM service options rather than logging into the hotspot, the Company's survey shows.

"Passengers predominantly use their mobile devices for calls, text messaging and email, as well as mobile data. More than half of the passengers who bought inflight Internet access used their tablet or smart phone, rather than a laptop, showing that people like the convenience of using their own, familiar, handheld devices. We are all becoming more and more dependent on our mobile phones so it is natural that people want to continue using them during flights," Dawkins said. When passengers have bought access to the inflight Internet, bandwidth consumption has typically been light, mirroring the way that people communicate on the ground when roaming. Of the top 20 websites accessed over OnAir's inflight Internet service, Facebook is number one with nearly 40 percent of all usage. To put that into perspective, the second-ranked website is Google, with only 10 percent. OnAir's combined GSM and inflight Internet services are in operation with Oman Air, Saudi Arabian Airlines and Egypt Air and will be launched with Singapore Airlines, Aeroflot and Libyan Airlines later this year.