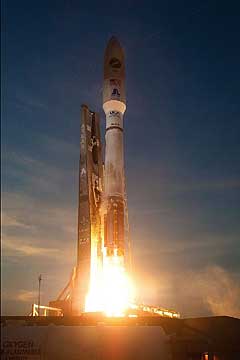 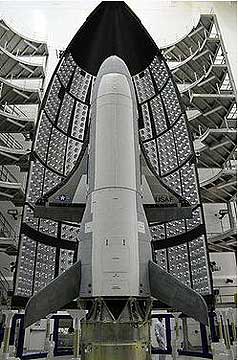 X-37B during encapsulation ahead of the OTV-1 launch


X-37B OTV-1 (Orbital Test Vehicle 1) is an American unmanned spacecraft, in what is the maiden flight of the Boeing X-37B. It was originally scheduled for launch in the payload bay of a Space Shuttle, however following the Columbia accident, it was transferred to a Delta II 7920. It was subsequently transferred to the Atlas V following concerns over the spacecraft's aerodynamic properties during launch.

This is the 21st Atlas V launch in program history. This space mission has much secrecy associated with it, including the unpiloted military space plane. The spacecraft will be placed into low Earth orbit for testing, then it will be de-orbited for landing. 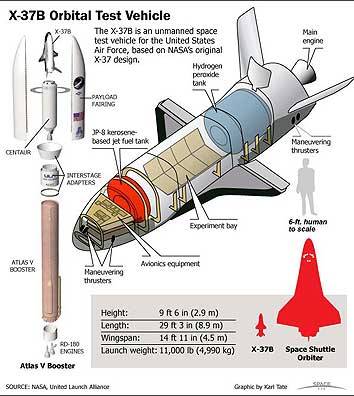 While the launch took place in Florida, the landing is to occur on a runway at Vandenberg Air Force Base, California with Edwards Air Force Base as the alternate site. The duration of the mission has not been announced, although an Air Force spokesperson has said the vehicle has a requirement to be on-orbit for up to 270 days.

In 1999, NASA selected Boeing Integrated Defense Systems to design and develop the vehicle, which was built by the California branch of Boeing's Phantom Works. 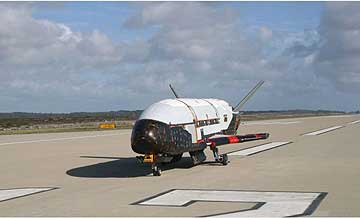 The X-37B space plane prototype is seen on a runway during flight tests in this undated photo released by the U.S. Air Force. Credit: USAF.


The X-37 was transferred from NASA to the Defense Advanced Research Projects Agency on September 13, 2004. The program has become a classified project, though it is not known whether DARPA will maintain this status for the project.

NASA's spaceflight program may be centered around the Crew Exploration Vehicle, while DARPA will promote the X-37 as part of the independent space policy which the Department of Defense has pursued since the Challenger disaster.

This vehicle has the potential to become United States' first operational military spaceplane, after the cancellation of Dyna-Soar in 1963. It is expected to operate in a velocity range of up to Mach 25.