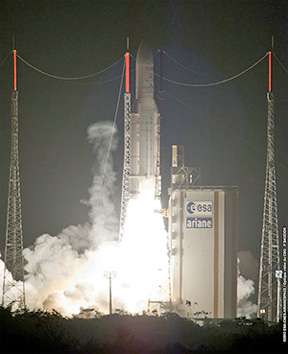 Ariane 5 lifts off with its heaviest payload ever – ATV Albert Einstein – at the start of the workhorse vehicle’s 69th launch from French Guiana.
Photo courtesy of Arianespace.
[SatNews] Ariane 5 ES has lifted off on its mission to place ATV-4 ‘Albert Einstein’ en route for the International Space Station (ISS). This, the 55th consecutive successful launch of Ariane from the European Space Centre at Kourou in French Guiana, again proves the reliability of the heavy-lift European launcher and, thanks to its record payload of 20.2 tons, Astrium’s ability to keep improving. Astrium developed and built the Ariane 5 launcher and, as prime contractor to the European Space Agency (ESA), the European Automated Transfer Vehicle (ATV).

Alain Charmeau, CEO of Astrium Space Transportation, said, “This 55th Ariane 5 success in a row is also the 4th successful launch of an ATV, both developed and built by Astrium. This double success further demonstrates our expertise in developing and manufacturing human spaceflight systems. The technologies developed for the ATV have enabled our teams to work with the European Space Agency and its partners and to look at future adaptations for human missions to the ISS, the Moon or even further afield. This new payload record also shows that the industrial system put in place since Astrium became prime contractor of Ariane 5 has created reliability and economies of scale. This is a key asset that Astrium is making use of in the development and manufacture of Ariane 5 ME and in the Ariane 6 industrial development studies – projects on which our teams are working tenaciously.”

Once placed into orbit at an altitude of around 260 kilometres, the ATV will deploy its four solar panels, with a wingspan of 22.3 metres, as well as an antenna for communication with the ISS. The ATV is scheduled to rendezvous with the ISS on June 15, 2013, 13:48:14 (GMT) and then to dock automatically. After aligning its docking system with the designated Russian module, ATV ‘Albert Einstein’ will gently come into contact with the Russian docking platform, with an accuracy of a few centimetres. Once contact has been made, the ATV will automatically execute the mechanical and electrical docking procedure, which will connect the cargo vehicle to the ISS. The ATV will then become a fully fledged operational module forming part of the Station.

Astrium has been the prime contractor of the Ariane 5 European launcher, one of the largest and most ambitious space programmes in the world, since 2003 and oversees an industrial network comprising more than 550 companies (over 20% of them SMEs) in 12 European countries. Astrium Space Transportation also manages the entire industry supply chain, from the manufacture of equipment and stages to the complete integration of the launcher in French Guiana, in line with the customer’s specifications. Thanks to the expertise the company has acquired and the investments it has made in this near 10-year period, Ariane 5 has become the most reliable commercial launcher on the global market and has increased its geostationary orbit payload capacity by nearly one metric ton. A flagship of European know-how, the Ariane 5 launcher has been specifically designed to carry heavy payloads into space.