A posting at the Advanced Television infosite is reporting that Northrop Grumman’s ‘Mission Extension Vehicle’  the robotic MEV-1 has arrived on station.

Launched in October of 2019, is now positioned in orbit a few hundred kilometres away from the target satellite to be rescued, the 18 year old Intelsat’s I-901 which is running out of fuel. 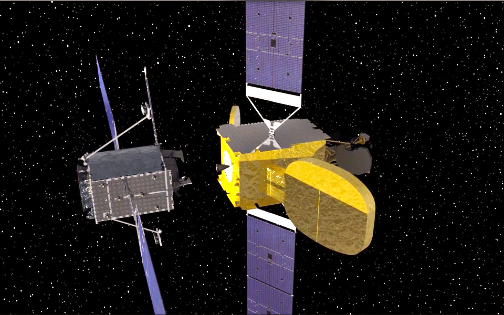 MEV-1’s task is to rescue the Intelsat craft and extend the life of I-901 by about five years. The overall mission is that MEV-1 will then detach itself and be ready for another rescue. MEV-1 has the ability to attach itself to about 75 per cent of the satellites in geostationary orbit.

Intelsat 901 will be moved to a so-called ‘graveyard orbit’ a few hundred kilometers higher than the conventional geostationary orbital arc. Then MEV-1 will ‘mate’ with I-901 in a fairly safe zone, well away from other orbiting satellites, a further safety measure just in case there’s a glitch.

MEV-1 has an on-board ‘stinger’ which can reach into I-901’s engine nozzle when about 1 meter away from the 901. Then mechanical fingers will reach the target satellite to pull the two together. 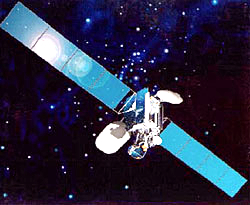 Artistic rendition of the Intelsat 901 satellite. Image is courtesy of Intelsat.

MEV-1 has a pair of propulsion pods with highly-efficient electric thrusters that can operate for hours or days at a time. There are cameras on board along with a highly sensitive LiDAR (Light Detection & Ranging) sensor. This is a high-end device often used for land surveying and is also the base technology used in police ‘radar’ speed devices and the data can be converted in near-real time into a 3D image and its positioning fed into MEV-1’s on-board computer,

Stage 1 is to approach to 80 meters — if that goes well, to move closer again to 20 metres. If all looks good, then the actual ‘mating’ will take place. There will initially be a practice run, a rehearsal for what is to follow.

Once the two are connected, MEV-1’s primary task is to take the place of Intelsat’s own station-keeping and to maintain the Intelsat correct orbital position. This is no mean feat and will be the first-ever docking between two spacecraft in geostationary orbit, some 36,000 kms. over the Equator.

The plan is for the pair, using MEV-1’s thrusters, to then relocate I-901 from its current 18 degrees West inclined orbit position to a new orbital location at 27.5 degrees West, and correctly positioned over the Equator.