Space Florida... Tying One On With The USAF, ATK + Astrotech 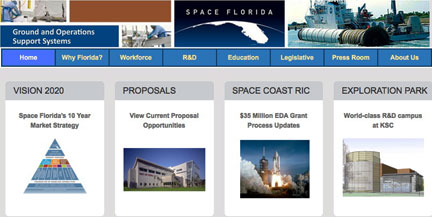 Link to Space Florida home
[SatNews] Early this month, the Space Launch Division of the USAF Space and Missile Systems Center/Space Development and Test Wing (SDTW) announced the award of a $48 million “Spaceports 3” contract to provide Florida-based launch services for the federal government.

The Indefinite Delivery, Indefinite Quantity (IDIQ) award reflects a potential value of up to $48 million for future Minotaur launches from Florida. The first part of this award, which will go into effect immediately (valued at $30,000), is a Task Order to develop a Logistics Strategy Plan for solid-propellant rocket launches from Space Launch Complex 46 (SLC-46) at Cape Canaveral, managed by Space Florida. This logistics plan would include specifics regarding infrastructure requirements for launch as well as facilities to be used to process future solid-fueled boosters and payloads. In November, Space Florida signed a Letter of Intent with Masten Space Systems to host demonstration launches of a Masten suborbital vehicle from SLC-36 in 2011. This partnership served as a good example of the flexibility of the Eastern Range to quickly support multiple types of commercial, civil and DoD missions. This capability will also serve well for any new Minotaur launches from Florida as well.

Space Florida will partner with ATK and Astrotech on the Spaceports 3 contract to provide the launch complex and process future payloads related to Minotaur launches from Florida. “Space Florida continues to work aggressively with all launch providers to increase operations in Florida in support of a wide variety of civil, defense and commercial missions,” said Space Florida President Frank DiBello. “Adding potential for Minotaur launches from SLC-46 is just part of an overarching strategy to enable multiple launch opportunities that will reinforce Florida’s position as the preferred launch location in the U.S.” In 2010, Florida launched 15 commercial, civil and defense rocket missions. Eastern Range responsiveness for these launches included the facilitation of five launches in 27 days from Florida, using four different types of launch vehicles.