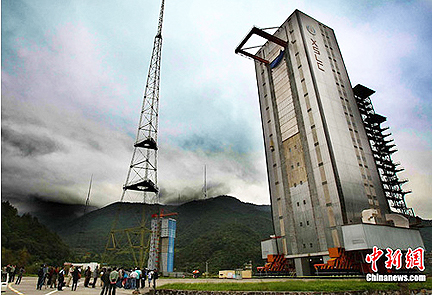 Xichang Satellite Launch Center in southwest China's Sichuan Province. [Photo: Chinanews.com]
According to China Central Television and the news portal Chinanews.com, the unnamed spokesman told the media the Chang'e-2 satellite and its CZ-3C launch vehicle are ready to blast off on October 1. In the case of bad weather, the launch will be delayed until October 2 or October 3. Fueling of the rocket will start on Sept. 30. The lunar probe will test key technology for Chang'e-3, collect data for future landings of Chang'e-3 and Chang'e-4, and provide high-resolution photographs of the landing area. Chang'e II is expected to take about 112 hours, or nearly five days, to arrive at its lunar orbit. The country plans to launch its third unmanned probe to the moon, Chang'e-3, in 2013. (Source: CRIENGLISH.COM)