Sea Launch Rocks And Rolls On The Waves...Readies + Steadies For Launch (Launch)

[SatNews] All is well at the Equator as the sea vessels prepare for the big launch.

The Sea Launch and Energia Logistics teams have initiated the automated L-72 hour launch countdown sequence at its equatorial launch site on August 14. Launch operations are now underway at the Equator, at 154 degrees West longitude. The Sea Launch Commander is positioned alongside the Launch Platform Odyssey, with the two vessels periodically connected by a link bridge that facilitates foot traffic between the vessels. A day before liftoff, the Zenit-3SL rocket will be erected on the launch pad for final tests of the launch system and spacecraft, prior to start of the terminal countdown. 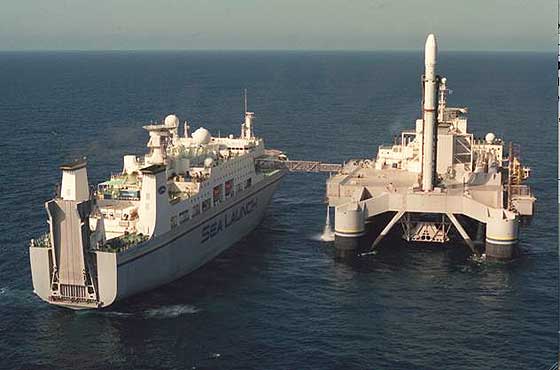 The launch of the Intelsat-21 communications satellite is presently scheduled for Friday, August 17th at 23:56 PDT (06:56 UTC/GMT, Saturday, August 18).

During final preparations for liftoff, the platform will be evacuated, with all personnel positioned on the ship, three miles up range from the platform. At launch, the rocket will lift the 5,984 kilograms (13,192 lbs.) spacecraft to geosynchronous transfer orbit, on its way to a final orbital location.

Based upon the Boeing Satellite Systems Inc. (BSSI) 702MP platform, Intelsat 21 will refresh capacity for one of Latin America’s most popular media distribution neighborhoods, serving direct-to-home (DTH) and cable programmers. Intelsat 21 will be located at 302 degrees East longitude and will replace the IS-9 satellite.

Sea Launch will carry live coverage of this mission streaming video on the Sea Launch website, beginning 15 minutes before the scheduled launch time, or 23:41 PDT (06:41 UTC/GMT, Saturday, August 18). The webcast may be viewed at. Details of the spacecraft, its payload, as well as the launch vehicle’s mission profile, launch timelines, groundtrack, injection orbit, launch campaign highlights and mission album images can be found at.