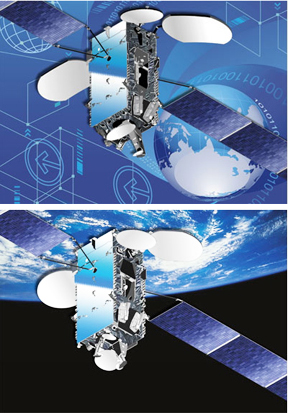 YAMAL 401 (top) YAMAL 402 (bottom) - images courtesy of ILS
[SatNews] International Launch Services (ILS) now has a contract for the ILS Proton launch of two commercial satellites, YAMAL 401 and YAMAL 402, for Russian satellite operator, Gazprom Space Systems. Gazprom is the parent company of Gazprom Space Systems and is the world’s largest producer of natural gas. The launches are scheduled for 2012-2013.

The 3,150 kg YAMAL 401 satellite, to be launched directly into geostationary orbit will be built by Russian spacecraft manufacturer ISS Reshetnev with a Thales Alenia Space payload. The YAMAL 402 satellite will be built by Thales Alenia Space and weigh approximately 5,250 kg. YAMAL 402 will be launched into geostationary transfer orbit to provide fixed communications and transmission services over Russia, CIS, Europe, the Middle East and Africa at the orbital location of 55 degrees East longitude. Both YAMAL 400-series satellites will have an anticipated service life of 15 years. The Proton vehicle is Russia’s premier heavy lift launcher and is built by Khrunichev, the majority owner of ILS. Proton has a long heritage, with over 355 launches performed since its maiden flight in 1965.