Switzerland In Stitches...Copernicus Scans Stitched Together


Kind of like putting a quilt together, except in this case it's huge photos of a country. 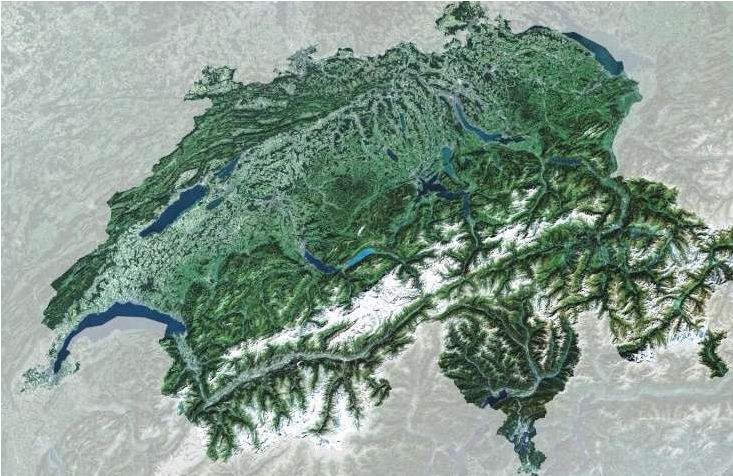 Multiple scans from the Copernicus Sentinel-2A satellite have been stitched together to create this complete image of Switzerland.

The southern part of the country is dominated by the Alps, some of which are snow-capped. One of the more obvious features in the lower central part of the image is the curved x-shape of the Aletsch Glacier, the largest in the Alps. Owing to climate change, the glaciers in this region are showing long-term retreat.

North of the Alps, the landscape descends into the Central Plateau, which covers about a third of Switzerland and is home to major cities like Zurich and the de facto capital city, Bern. It is the most densely populated region and hosts the majority of the country's industry, manufacturing and farming.

Along the northwestern edge of the country are the Jura mountains, consisting of a sequence of 'folds' in the geology, visible in the image as linear ridges running roughly southwest to northeast.

Switzerland has thousands of lakes shaped by glaciers during the last ice age, about 15 000 years ago. Lake Geneva in the west is shared with France, while Lake Constance in the east is shared with Germany and Austria, making Lake Neuchâtel in the northwest the largest entirely within Switzerland.

The lakes appear different colors owing to variations in algae content or to the presence of finely ground rock flowing in from the mountain glaciers.

Near the center of the country we can see Lake Lucerne with its four 'arms'. The city of Lucerne sits on the western end of the lake, and is the site of the latest ESA ministerial council.

ESA is proposing the next-generation scientific Earth observation program at the council, focusing on the development of new satellites to address global challenges.

Other proposals address a smaller satellite for monitoring ozone in the stratosphere, the provision of essential data for climate research, and public–private partnerships.