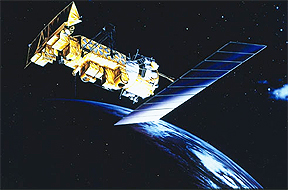 An artistic impression of "what could have been," Phobos-Grunt
[SatNews] A Russian spacecraft that became stranded in orbit on the way to Mars last year....

....is expected to fall back to Earth next week. The 13.5 ton Phobos-Grunt has been circling Earth since November when rocket boosters failed to ignite to send the spaceship on its journey to the Martian moon of Phobos. The spacecraft suffered a computer malfunction after launch and when repeated attempts to contact the rocket failed, the Russian space agency, Roscosmos, had to abandon the mission.

Officials at Roscosmos admitted that 20 to 30 fragments of Phobos-Grunt, weighing a total of 200kg, might hit the Earth. Among the most likely parts to survive are the cone-shaped sample return capsule that is protected with a heat shield. The capsule was designed to survive a crash landing without a parachute. Any components that are not vaporized during re-entry are likely to fall into the ocean or land in sparsely populated areas.

The spacecraft, the largest planetary rocket ever built by Russia, was designed to return rock samples from Phobos, the first time material would have been brought back from the moon of another planet. The rocket was to deliver a Chinese Mars orbiter and carried containers of bacteria to test their survival in space. Space agencies tracking the rocket from radar stations around the world have stepped up their monitoring to once every day.