[SatNews] Euroconsult has forecast that the number of satellite communications terminals aboard commercial and private ships will more than double over the next decade, as demand for bandwidth on the high seas continues to surge. 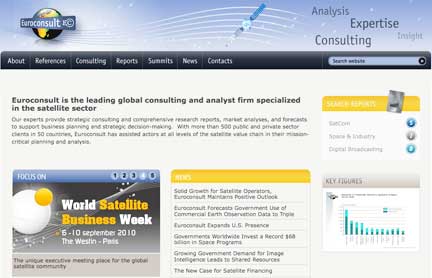 Direct link to Euroconsult's homepage...
In a new report, “Maritime Telecom Solutions by Satellite: Global Market Analysis & Forecasts,” Euroconsult provides an in-depth view of the dynamics determining growth in the maritime sector, along with analysis and forecasts for the maritime satcom market. The report also offers a detailed review of the merchant shipping, fishing, passenger ship, leisure vessel and offshore segments. The breakdown between MSS and VSAT is explored through each of these sections. “Increasing onboard bandwidth requirements are driving the maritime market in a direction that is beneficial to satellite communications,” said Pacôme Revillon, CEO of Euroconsult. “Real-time monitoring, remote diagnostics, maintenance, route planning and electronic port declaration are just a few of the applications generating huge capacity demand at sea.”

Euroconsult said the number of terminals used for global maritime satellite communications grew at around 11 percent in 2009, while wholesale capacity revenues from the sector increased more than 15 percent. The total size of the market reached about 295,000 active terminals in 2009 that generated more than $1.3 billion in revenues at the tier-1 service provider level. Established MSS services and the emerging VSAT business both contributed to the overall growth of the maritime satellite communications market. Despite a drop in global maritime activity due to declining economic conditions, increasing demand for operational bandwidth aboard ships as well as Internet connectivity required by crews and passengers have been driving growth. One VSAT provider cited in the report said customers’ monthly data transmission per ship increased from 9.1 gigabytes in April 2009 to 19.7 gigabytes in April 2010.

The global market has been growing rapidly since 2005, with a 14 percent compound annual growth rate (CAGR) in satellite capacity revenues; nearly 4 percent CAGR in the equipment sales; and 8 percent CAGR for the global tier-1 service providers. The fastest growth — 24 percent annually since 2005 — has been for VSAT services. While VSAT services are not compliant with safety communications needs, they are the mainstay of crew communications and satisfy the increasingly demanding passenger communications needs aboard cruise ships and luxury yachts. Traditional MSS services that operate in the L-band at lower data rates than VSAT terminals (using the C- and Ku-bands) still allow for smaller and cheaper equipment and remain important for safety communications and regulatory obligations. MSS accounted for 97 percent of the maritime terminals in 2009, but only 52 percent of service revenues. Euroconsult projects that by 2020, the VSAT market will account for the majority of satellite-based maritime communications revenues generating close to $1 billion in revenues for service providers in 2020.

The report also suggests that the proliferation of new Ka-band based services, which allow much faster upload and download speed than either traditional VSAT or MSS, could expand the maritime market further. Inmarsat, the largest MSS operator, has recently announced the contract for a new constellation of three Ka-band satellites planned to be operational by 2014/2015. Euroconsult predicts that the maritime satcom market will grow at a healthy rate over the next decade, but not as rapidly as in recent years. Total maritime satcom terminals are expected to grow at a CAGR of about 6 percent over 2010-2020 while maritime satellite service provider revenues should grow at around 4 percent annually over the same period, with revenues somewhat impacted by decreasing equipment revenues.