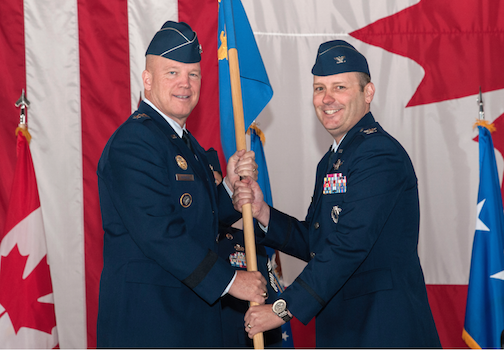 [SatNews] "Getting an opportunity to command is very rare; getting to do it again is awesome. It's a dream come true..."

"Sir I assume command," Schiess told Raymond. He set the tone for his command by quoting the sixth President of the United States John Quincy Adams.

"If your actions inspire others to dream more, learn more, do more and become more, you are a leader," he said.

Schiess said he was glad to be back in Colorado Springs and ready to lead and serve in his new position. A mentor once told him the more you talk, the less time you have in command, and Schiess said the clock is ticking.

"Getting an opportunity to command is very rare; getting to do it again is awesome. It's a dream come true," he said, referring to previous assignments as commander of the 4th Space Operations Squadron at Schriever AFB, Colo. and 45th Operations Group at Cape Canaveral Air Force Station, Fla. Schiess also noted excellent teamwork between the 21st Space Wing, community leaders and mission partners to provide services needed by the nation.

"We will be an integral part of 14th Air Force and Air Force Space Command, working hard together with our sister wings and other mission partners to fulfill the AF mission to Fly, Fight, and Win," said Schiess. "We will work hard every day to provide space superiority to defend the United States and our allies and to provide needed mission and medical support to our many mission partners."

Before concluding his speech, Schiess gave his first official command to the total force personnel of the 21st SW.

"So, I charge every member of the 21st Space Wing to inspire others to dream more, to learn more, to do more and to become more. Be the leader we all hope to serve with," he said.

The 21st SW plays a vital role in protecting space for the nation and its allies. The wing provides missile warning and space control to North American Aerospace Defense Command and U.S. Strategic Command through a network of command and control units and ground based sensors operated by geographically separated units around the world.

The 21st SW is the Air Force's fifth largest wing with consists of a work force of about 4,300 officer, enlisted, civilian and contract employees. The wing covers the globe with locations in seven countries, across 13 time zones, consisting of five groups, wing staff agencies, and 38 units at 21 locations. Along with those components there are 53 mission partners including HQ NORAD, HQ NORTHCOM, HQ Air Force Space Command, and the 302nd Airlift Wing. The wing boasts the largest comptroller's squadron responsible for more than $2 billion annually.

Before taking command of the wing, Schiess was Director of Space Forces, U.S. Air Forces Central Command, U.S. Central Command. This is not Schiess' first time in the area. He served in the 50th Space Wing, Schriever AFB from 2000-2002 and again from 2007-2011. He also served at Headquarters Air Force Space Command from 2002-2003.