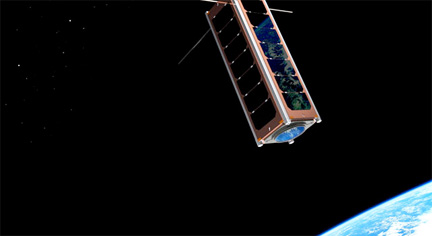 This image is an artist concept of a CubeSat in space. CubeSats are tiny, fully-functional satellites. Image credit: Clyde Space
[SatNews] NASA has selected 20 small satellites, including two from NASA's Jet Propulsion Laboratory in Pasadena, Calif., to fly as auxiliary payloads aboard rockets planned to launch in 2011 and 2012.

The proposed CubeSats come from a high school in Virginia, universities across the country, NASA field centers and Department of Defense organizations. CubeSats are a class of research spacecraft called nanosatellites. The cube-shaped satellites are approximately four inches long, have a volume of about one quart and weigh 2.2 pounds or less. The selections are from the second round of the CubeSat Launch Initiative. The satellites are expected to conduct technology demonstrations, educational or science research missions. The selected spacecraft are eligible for flight after final negotiations when an opportunity arises. The satellites come from the following organizations, which include the first high school proposal selected for a CubeSat flight:
The first CubeSats to be carried on an expendable vehicle for the agency's Launch Services Program will comprise NASA's Educational Launch of Nanosatellite, or ELaNa, mission. ELaNa will fly on the Glory mission scheduled to lift off on Feb. 23. The 12 CubeSat payloads selected from the first round of the CubeSat Launch Initiative will have launch opportunities beginning later this year.