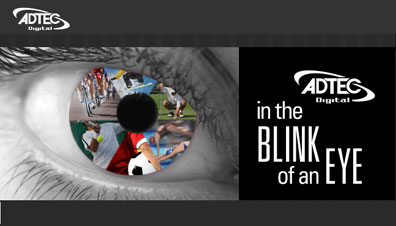 ADTEC Digital homepage
[SatNews] The tests, apparently, speak for themselves...

In partnership with Adtec Digital, Toronto, Canada based TV2Go, a satellite transmission company for international broadcasters, has been testing 32APSK for the past year, along with such companies as TNT and Encompass in the United States; United Kingdom based IMG Media, the world’s largest independent producer and distributor of sports programming; and global television network British Sky Broadcaster. One of the most significant tests came during the 2010 professional football season when TV2Go and IMG Media successfully sent a 32APSK modulation test across the Atlantic for International Distribution with a data rate of 30 megabits per second (Mbps) using a 9 megahertz (MHz) carrier.

32APSK is a digital modulation scheme that conveys data by changing, or modulating, both the amplitude and phase of the carrier wave. In combination with digital television broadcast standard DVB-S2, specification permits the use of 16APSK and 32APSK modes, allowing 16 and 32 different symbols respectively or 16 or 32 nodules of energy. Satellites have 500 MHz of bandwidth with each bandwidth divided into 36 MHz transponders. Each transponder can be divided into a multiple of three MHz slots, each with a monetary value attached. Hepes estimates that a full transponder of 36 MHz could cost as much as $1,000 per hour; but by using Adtec’s integrated 32APSK and MPEG 4 4:2:2 compressions, the cost will drop below $200 per hour for the same, if not better, quality with a much narrower bandwidth of 6 to 7 MHz transponders. To learn more about Adtec Digital's discrete millisecond-accurate synchronization 3D solution, visit booth 1037 at the 2011 Content and Communication World expo, October 12-13, at the Jacob J. Javits Center, New York.