It is located on the premises of ALTEC, an engineering and logistics services joint venture between Thales Alenia Space and ASI.

Developed as part of the ExoMars 2020 contract, the ROCC will control and monitor the Rover’s operations. Commands will be transmitted via the Trace Gas Orbiter (TGO), launched on the ExoMars 2016 mission and now in orbit around Mars, and the space communications network at ESA's European Space Operations Centre (ESOC) in Darmstadt, Germany. 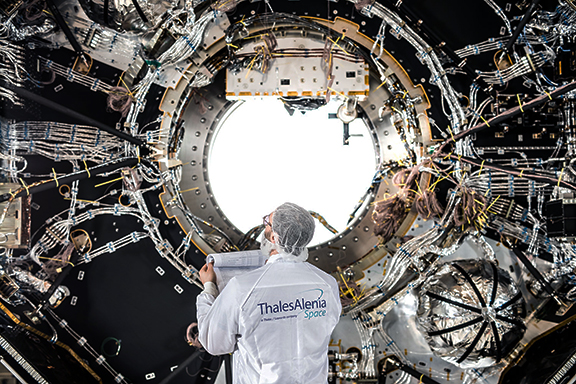 Conducted by ESA in conjunction with Russian space agency Roscosmos, ExoMars 2020 will deliver a European rover and a Russian platform to the surface of Mars.

A Proton rocket will launch the spacecraft, which will arrive at Mars on March 19, 2021, after a long journey. The ExoMars rover will travel across the Martian surface to search for signs of life, trying to answer questions that have long fascinated humanity. It will collect samples with a drill developed and built by Leonardo and analyze them using its own advanced built-in laboratory.

ExoMars will be the first mission to combine the capabilities of moving across the surface and studying Mars in depth. The ROCC will start operation in July 2020, when the ExoMars 2020 spacecraft lifts off for the interplanetary trip. 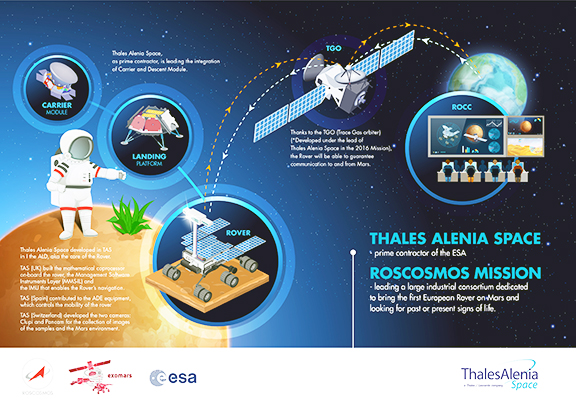 The ExoMars 2020 mission is now at an advanced development stage. After integrating and testing the Rover’s core system, the Analytical Laboratory Drawer (ALD), at its facility in Torino, Italy, Thales Alenia Space continues to integrate and test the Rover Ground Test Module, a full Rover simulator equipped with a copy of the ALD module. This test module will be used in Turin to rehearse all operational and scientific activities related to the Rover’s mission on Mars.

Thales Alenia Space is also developing the mission control software and completing the integration and testing of the Descent Module (provided by Lavochkin), including its mating to the Carrier Module (provided by OHB). This assembly will then be shipped to the Thales Alenia Space’s Cannes plant in July for environmental testing. Before leaving Cannes, the Rover, named “Rosalind Franklin”, will be mated with the Landing Platform, “Kazachok”, and the Carrier Module to form the complete ExoMars 2020 spacecraft. The launch is planned for July of 2020 from the Baikonur Cosmodrome in Kazakhstan.

Jan Wörner, ESA’s Director General, said this is the crucial place on Earth from where we will listen to the rover’s instruments, see what She sees and send commands to direct the search for evidence of life on and under the surface.
Italy has, through Italian Space Agency (ASI), a strong knowledge in the study and exploration of Mars thanks to its participation in the most important International missions for the study of the Red Planet. ExoMars mission represents the summary of Italian technological ability reached during these years that today, with the birth of Altec mission control center, finds its widest expression in the demonstration of the skills of the scientific community and of our space industry. Through ROCC, Europe will have the great opportunity to manage the activities of the Rover on Mars so as to plan and test its movements on the surface of Mars, searching for areas which are more appropriate for reaching the goal of the mission: the search of traces which may be associated to past or present forms of life.

Giorgio Saccoccia, President of Italian Space Agency, said that this will allow for the identification and spread of crucial information for a complete knowledge of the planet. ROCC will play a key role for the success of ExoMars 2020 rover as well as for ASI itself. This will be the first step to address the control center toward new missions for the study of Mars as well as of other celestial bodies. The company has invested in this activity because of the firm belief that it represents an essential element for the future of the robotic exploration of the Universe

Donation Amoroso, SVP, Observation, Exploration and Navigation, added that the company is delighted to play a leading role in Europe’s ambitious program to study the Red Planet by contributing with the firm's expertise and technology. This marks the inauguration of the ROCC, reflecting a fruitful collaboration between space agencies and industry, and signaling the beginning of a search for answers to questions that have long fascinated humanity.

Vincenzo Giorgio, CEO of Altec, remarked that the company is honored to be at forefront of European Robotic exploration with this important contribution that is the Rover Operations Control Center. The ROCC is the result of dedication and a strong goal oriented approach by agencies, industry and its subcontractors, to make the first European Robotic exploration mission a success, where the ROCC is the brain of the entire mission.