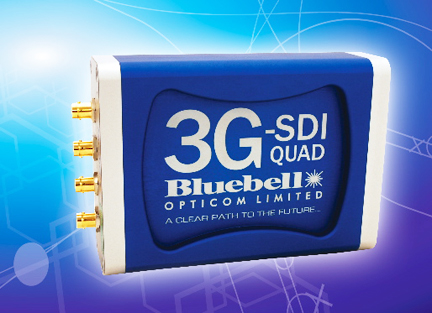 Link to Bluebell's homepage...
[SatNews] The BlueBox Quad 3G-SDI is a 4 channel multiplexer/demultiplexer system that makes 3G-SDI to fibre conversion over standard fibre optic cable possible. The Blue Box 3G provides a compact conversion unit which allows the outputs from as many as four cameras to be transmitted over a single standard SMPTE Hybrid or military tactical cable.

Applications have already been found in many Outside Broadcast vehicles, special event companies and in pre-fibred venues, particularly with the advent of 3D and the move to a 3G infrastructure. The 4 channel configuration allows two separate 3D camera rigs to be transported over one cable link. Several systems are currently being deployed in South Africa for coverage of the football World Cup. Each signal within the fibre has a different optical wavelength, enabling interference free transmission over longer distances. The system is available in different configurations all operating over a single SMPTE Hybrid or tactical cable link. It can be supplied with customer specific connectors, Neutrik OpticalCON, Lemo 3K Series and standard SC/PC for example. Each interface is contained within a robust and rugged aluminium enclosure suited to the demands of constant rigging/derigging.