[SatNews] NASA has completed the first developmental test series on the RS-25 engines that will power the agency’s new Space Launch System (SLS) rocket on missions deeper into space than ever before.

The test series wrapped up Thursday with a seventh hot fire test of a developmental RS-25 engine on the A-1 Test Stand at NASA’s Stennis Space Center in Bay St. Louis, Mississippi. The test ran for a full-duration 535 seconds.

“The completion of this test series is an important step in getting SLS ready for the journey to Mars,” said Steve Wofford, engines manager at NASA’s Marshall Space Flight Center in Huntsville, Alabama, where the SLS Program is managed for the agency. “The RS-25 engine gives SLS a proven, high performance, affordable main propulsion system. It is one of the most experienced large rocket engines in the world, with more than a million seconds of ground test and flight operations time.” 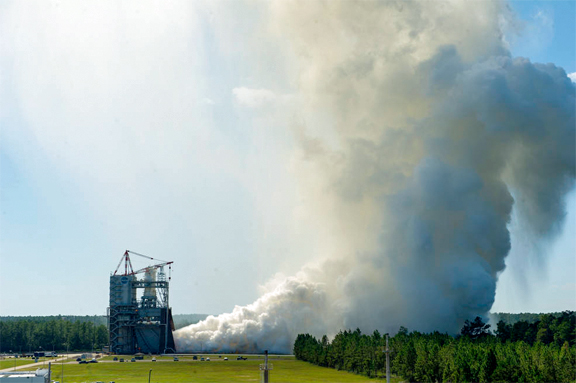 The RS-25 engine fires up for a 535-second test Aug. 27, 2015 at NASA's Stennis Space Center near Bay St. Louis, Mississippi. This is the final in a series of seven tests for the development engine, which will provide NASA engineers critical data on the engine controller unit and inlet pressure conditions.

The series was designed to collect valuable data on performance of the RS-25 engine, a former space shuttle main engine operating at higher thrust levels in order to provide the power needed for the SLS vehicle. Of particular interest is data that will aid in development of a new engine controller, or “brain,” to monitor engine status and communicate programmed performance needs.

“These are extremely reliable engines. We are testing them again because we want to ensure that the engine performs as required with a new engine controller, higher propellant inlet pressures and lower temperatures that are part of the SLS design. We also want to mitigate any risks on the ground before flight,” Wofford said.

Four RS-25 engines will help power the SLS core stage during launch. Firing simultaneously at 109 percent of its operating level, the engines will provide approximately 2 million pounds of thrust. The engines will operate in conjunction with a pair of five-segment solid rocket boosters for a total of 8.4 million pounds of thrust to lift the initial 70-metric-ton (77-ton) SLS off the launch pad. The SLS eventually will evolve to a 130-metric-ton (143-ton) configuration that will enable missions to such deep space destinations as an asteroid and Mars.

Testing of RS-25 flight engines for the initial SLS missions will begin at Stennis this fall.  In addition to testing RS-25 flight engines, Stennis operators will employ their collective expertise to test the SLS core stage. The B-2 Test Stand at Stennis is being renovated to conduct tests on the SLS flight core stage prior to its first uncrewed mission. That testing will involve installing the flight stage on the stand and firing its four RS-25 engines simultaneously, just as during an actual launch.

“What a great time to be at Stennis,” Center Director Rick Gilbrech said. “When it comes to powering the future of the deep space exploration program for this country, this is the front lines, where we enable those missions to fly.”

The developmental tests began with a Jan. 9 hot fire and resumed in May after scheduled work was completed on the high-pressure industrial water system that provides the thousands of gallons of water needed during an engine test. Aerojet Rocketdyne of Sacramento, California, is the prime contractor for the RS-25 engine work.

“This was a great test series for Stennis,” said Ronnie Rigney, RS-25 project manager at Stennis. “Our teams built up a lot of history with space shuttle main engines and were able to use that expertise to meet very challenging test specifications for the RS-25. The testing done here will help ensure the engines perform as needed during actual SLS missions.”

For more information about SLS, visit: