[SatNews] The Sentinel-5 Precursor platform and the TROPOMI instrument have been integrated together to form the satellite which will be leaving the UK for testing.

Airbus Defence and Space will deliver the spacecraft to Intespace in Toulouse, France, for final system level testing. The spacecraft is scheduled to be launched in April 2016 by a Eurokot rocket from Plesetsk, Russia. 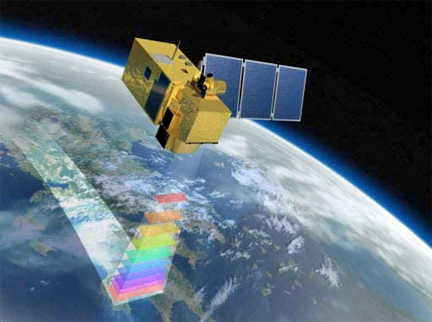 Artistic rendition of the Sentinel-5 satellite.

Sentinel-5 Precursor is a low-cost, highly technical satellite that will provide atmospheric chemistry data to the Copernicus program before the Sentinel-5 instrument becomes operational in 2021 on the MetOp Second Generation satellite. Sentinel-5 Precursor is carrying the TROPOMI (TROPOspheric Monitoring Instrument) instrument, developed by Airbus Defence and Space Netherlands for the European Space Agency (ESA) and the Netherlands Space Office. TROPOMI will take measurements of ozone, nitrogen dioxide, sulphur dioxide, methane and other atmospheric pollutants at a higher resolution than previous instruments. Having more accurate atmospheric data will enable improved climate models and weather forecasting to be made.

Sentinel-5 Precursor is part of the global monitoring programme for environment and security (Copernicus), a joint European Commission–ESA undertaking which aims to supply geo-information products and services based on the use of data from space that will help European institutions and public authorities to fulfil their mission of safeguarding the civil population, managing risks, and protecting the environment.

The mission has made use of the AstroBus Platform Line developed by Airbus Defence and Space where the avionics and platform are based on a standard, but customizable design that covers a large variety of low Earth Orbit applications and can be tailored to customer requirements. This is essential for an ESA mission that must meet geo-return targets. Sentinel-5 Precursor has been built using the AstroBus-Medium platform embedding the AS250 avionics. The success of the project so far serves as an excellent endorsement of Airbus Defence and Space platform product policy in an ESA program environment.

The Astrobus Platform Line has also been used, notably, on the following missions: