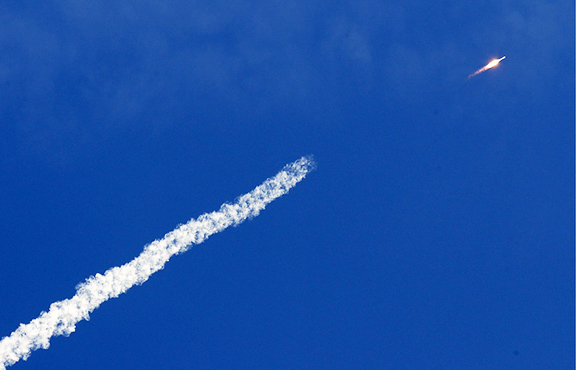 A Soyuz-2.1b carrier rocket,  photo is courtesy of Mikhail Japaridze/TASS.

As the launch vehicle lifted off from the launch pad, it was struck by lightning. Despite this occurrence, all the rocket equipment worked normally and the satellite was delivered into orbit within the designated time.

The Soyuz-2.1b carrier rocket with the Glonass-M navigation satellite blasted off from the Plesetsk Cosmodrome at 09:23 Moscow time on May 27. The carrier rocket successfully delivered the Glonass-M navigation satellite into the assigned orbit within the designated time. Specialists of the Titov Main Testing Space Center of the Aerospace Forces’ Space Force have assumed control of the space vehicle.

This is the first launch of a Soyuz 2 carrier rocket from the Plesetsk Cosmodrome this year.

Russia’s Glonass orbital grouping currently comprises 26 satellites, of which 24 are operating according to their functional designation — one is at the stage of flight tests and the other is in the orbital reserve. About 15 satellites are operating beyond their service life.

The Russian spaceport’s chief said that the launch was carried out in the normal mode. The weather was not an obstacle and the Space Force of Russia’s Aerospace Forces are all-weather troops. This is yet another proof that lightning cannot damage Russia's aerospace weapons.