[SatNews] The World Teleport Association (WTA) announced the recipients of its 16th annual Teleport Awards for Excellence during a luncheon ceremony.

The awards are presented each year to organizations and individuals in the teleport industry whose achievements have been deemed exceptional by the international trade association and its awards committees, made up of industry members from across the globe. The 2011 recipients are: 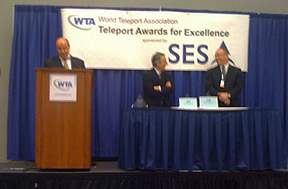 Adrian Ballintine, president of NewSat, accepting his WTA award as Teleport Executive of the Year. Photo courtesy of Silvano Payne.
The winners for all three categories were selected by a volunteer committee of WTA members and previous Award winners based on nominations submitted during the first quarter of 2011. In addition to the above honorees, WTA presented the previously announced Teleport Executive of the Year to Adrian Ballintine, President of NewSat.

The 2011 Luncheon and Awards Ceremony, sponsored by SES, hosted many of the world’s leading teleport operators and previous winners of WTA’s Teleport Awards for Excellence. A senior representative from SES, Chris Schram, gave the Host's Welcome and presented the awards to the recipients, with WTA Director of Development Louis A. Zacharilla announcing the winners. Commenting on the 2011 Awards, Mr. Zacharilla noted that, "Innovation and dedication to service have long been motivating drivers for the teleport industry. Each of the finalists in the 2011 Teleport Awards for Excellence has gone above and beyond a daily commitment to quality operations. As a group they exemplify the drive that has made this industry successful, as well as a community with a dedication to helping others.”