....for its GSS6400 GNSS Record and Playback Test System. The data sets comprise of live GNSS (GPS, GLONASS and QZSS) environmental capture data set samples, recorded at major locations worldwide, in challenging urban and suburban conditions. The data sets encompass a variety of recorded scenario’s ranging from drive through multi-level roads, tunnels and car parks to drive through in downtown areas with high rise buildings. The real world effects such as atmospheric, environmental (multipath, interference, terrain obscuration) are all captured making use of data sets ideal for debugging issues, performance tuning and optimization of GNSS receivers.

Last year Spirent introduced the GSS6400 GNSS Record & Playback System to complement its popular range of simulators. Until now customers had to record the data themselves. With the data sets now available, customers will be able to save valuable time and effort and also maximise their test coverage, resulting in accelerated product release cycles. The data sets are accompanied by reference ―truth― position data in time stamped NMEA format, recorded using a high grade inertial (INS) aided receiver. Not only do the customers benefit from saving the cost of purchasing or leasing a high grade receiver, but are also able to accurately characterize the performance of the device under test which is crucial during the design phase.

There has been a surge in integration of sensors and GNSS in navigation systems. This has resulted in GSS6400 becoming increasingly popular in hybrid and automotive applications because of to its ability of playing back of serial data such as CAN Bus, DR Sensors(gyros and wheel speed sensors), 1PPS signals etc at the same time as GNSS signals. Additionally, the GSS6400 can log serial data into separate files for subsequent analysis or post processing. NMEA logs or WiFi war-drive data are amongst the types of file that the GSS6400 is able to record. Unlike traditional record and playback systems which require additional PC & External power the GSS6400 is an easy-to-use, self-contained unit with everything needed to start testing. It records all the radio frequency energy in the specified bandwidth – GPS L1, GLONASS L1 and QZSS. Both the wanted GNSS signals, including SBAS where present, and the background noise (or interference), is recorded. 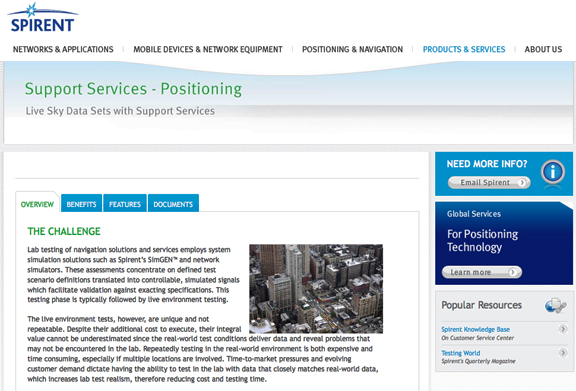