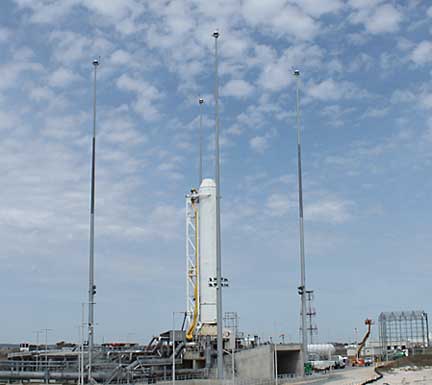 ...has slipped from its original launch date. The expectations are for the launch to now occur sometime between October and November of this year. During a conference call with financial analysts, Mr. Thompson indicated there was no specific element that will cause the delay. As a matter of fact, the propellant-handling facility and the certification of the Wallops Island, Virginia, spaceport are all proceeding on schedule without any incidents. Expectations continue that the Wallops launch pad will be handed over to Orbital this summer.

The inaugural flight of the Antares rocket is expected to occur in August, following a test firing of its first stage on the launch pad in July. Previously, a kerosene leak in one of the Aerojet-supplied AJ26 rocket's engines set for installation on the Antares caused a fire at the test-stand at NASA's Stennis Space Center—additional inspection of the Aeroject-modified Russian NK-33 engines have located no additional cracks of the kind that led to the earlier fire.