Hubble's Back! With The Ultimate in Job Security — Take a Portrait of the Universe

The repairs on the NASA's Hubble Space Telescope were made. Next the experts stepped in to calibrate and study the telescope — and so for three months that's what the scientists did. Were they successful? Witness the most recent views of colorful, multi-wavelength pictures of far-flung galaxies, a densely packed star cluster, an eerie "pillar of creation," and a "butterfly" nebula. Hubble's suite of new instruments allows it to study the universe across a wide swath of the light spectrum, from ultraviolet all the way to near-infrared. In addition, scientists released spectroscopic observations that slice across billions of light-years to probe the cosmic-web structure of the universe and map the distribution of elements that are fundamental to life as we know it. 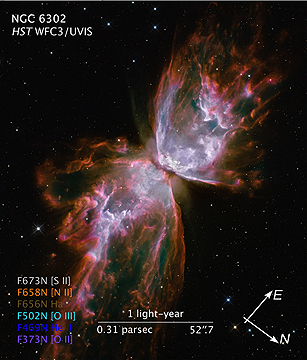 NASA's Hubble Space Telescope is back in business after astronauts refurbished it in May. These first snapshots from Hubble showcase the 19-year-old telescope's new vision. For the past three months, scientists and engineers at the Space Telescope Science Institute and Goddard have been focusing, testing, and calibrating the instruments. Hubble is one of the most complex space telescopes ever launched, and the Hubble servicing mission astronauts performed major surgery on the 19-year-old observatory's multiple systems. This orbital verification phase was interrupted briefly July 19 to observe Jupiter in the aftermath of a collision with a suspected comet.

"This marks a new beginning for Hubble," said Ed Weiler, associate administrator for NASA's Science Mission Directorate at NASA Headquarters in Washington. "The telescope was given an extreme makeover and now is significantly more powerful than ever, well-equipped to last into the next decade." 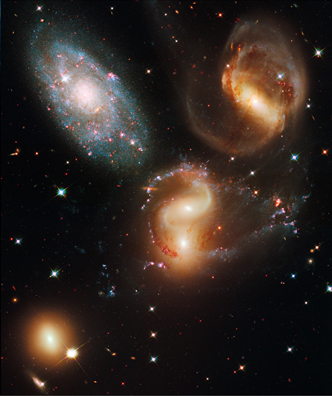 "I fought for the Hubble repair mission because Hubble is the people's telescope," said Mikulski, chairwoman of the Commerce, Justice and Science Appropriations Subcommittee that funds NASA. "I also fought for Hubble because it constantly rewrites the science textbooks. It has more discoveries than any other science mission. Hubble is our greatest example of our astronauts working together with scientists to show American leadership and ingenuity. I want to salute Team Hubble— everyone who worked on Hubble from the Goddard Space Flight Center and Space Telescope Science Institute scientists in Maryland, to the ground crew at the Kennedy Space Center, to the Johnson Space Center where the astronauts train, and to the astronauts who were heroes in space."

The new instruments are more sensitive to light and, therefore, will improve Hubble's observing efficiency significantly. It is able to complete observations in a fraction of the time that was needed with prior generations of Hubble instruments. The space observatory today is significantly more powerful than it ever has been.

"We couldn't be more thrilled with the quality of the images from the new Wide Field Camera 3 and repaired Advanced Camera for Surveys, and the spectra from the Cosmic Origins Spectrograph and the Space Telescope Imaging Spectrograph," said Keith Noll, leader of a team at the Space Telescope Science Institute in Baltimore, which planned the early release observations. "The targets we've selected to showcase the telescope reveal the great range of capabilities in our newly upgraded Hubble."

These results are compelling evidence of the success of the STS-125 servicing mission in May, which has brought the space observatory to the apex of its scientific performance. Two new instruments, the Wide Field Camera 3 and Cosmic Origins Spectrograph, were installed, and two others, the Advanced Camera for Surveys and Space Telescope Imaging Spectrograph, were repaired at the circuit board level. Mission scientists also announced Wednesday that the Near Infrared Camera and Multi-Object Spectrometer was brought back into operation during the three months of calibration and testing. 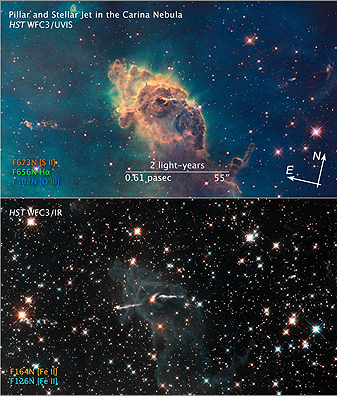 "On this mission we wanted to replenish the 'tool kit' of Hubble instruments on which scientists around the world rely to carry out their cutting-edge research," said David Leckrone, senior project scientist for Hubble at NASA's Goddard Space Flight Center in Greenbelt, Maryland. "Prior to this servicing mission, we had only three unique instrument channels still working, and today we have 13. I'm very proud to be able to say, 'mission accomplished.'"

Hubble now enters a phase of full science observations. The demand for observing time will be intense. Observations will range from studying the population of Kuiper Belt objects at the fringe of our solar system to surveying the birth of planets around other stars and probing the composition and structure of extrasolar planet atmospheres. There are ambitious plans to take the deepest-ever near-infrared portrait of the universe to reveal never-before-seen infant galaxies that existed when the universe was less than 500 million years old. Other planned observations will attempt to shed light on the behavior of dark energy, a repulsive force that is pushing the universe apart at an ever-faster rate.

The Hubble Space Telescope is a project of international cooperation between NASA and the European Space Agency. Goddard manages the telescope. The Space Telescope Science Institute conducts Hubble science operations. The institute is operated for NASA by the Association of Universities for Research in Astronomy Inc. in Washington, and is an International Year of Astronomy 2009 program partner.

For images and more information about the Hubble Space Telescope, visit:

This celestial object looks like a delicate butterfly. But it is far from serene. What resemble dainty butterfly wings are actually roiling cauldrons of gas heated to more than 36,000 degrees Fahrenheit. The gas is tearing across space at more than 600,000 miles an hour — fast enough to travel from Earth to the moon in 24 minutes!

A clash among members of a famous galaxy quintet reveals an assortment of stars across a wide color range, from young, blue stars to aging, red stars.

These two images of a huge pillar of star birth demonstrate how observations taken in visible and in infrared light by NASA's Hubble Space Telescope reveal dramatically different and complementary views of an object.

These photos and expanded descriptions can be found at.