Telos Zephyr iPort will be on display at the upcoming NAB Convention in Las Vegas, April 20-23 in the Telos Systems Streaming Solutions Center, located at booth N7620. 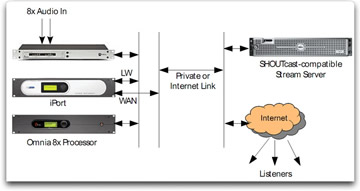 According to Igor Zukin, the Director of Engineering at Streamcom, New Zealand, the challenge was to build a 256x256 audio routing network among 25 remote stations across an IP WAN using an UDP router. Nearly impossible with other IP codecs, but the Telos Zephyr iPort made the job look easy and the product even encodes the Internet streams at the radio stations using the latest AAC-HE codec. Telos Zephyr houses eight stereo MPEG codecs in a single 2RU box, capable of either 8 bi-directional or 16 encode-only channels. It can be used for any application where MPEG encoding and/or decoding is needed for transmission over IP channels such as VPNs, satellite links, Ethernet radio systems, and Telco or ISP-provided QoS-controlled IP services. Applications include studio-to-transmitter links, network distribution systems, and links to remote studios. With an appropriate server, the iPort can be used for Internet streaming, broadcasting to mobile phones, and audio distribution systems. State-of-the-art MPEG codec technology is used to conserve network bandwidth, while preserving high audio quality. A range of codec types and bitrates are supported. The Zephyr iPort uses the Livewire standard from Axia Audio. Uncompressed audio is transferred via an Ethernet connection to/from your Livewire network, eliminating expensive, space-consuming converters and connectors. A second Ethernet connector interfaces the compressed audio to a WAN. It can also be paired with an Axia AES/EBU or Analog Audio Node to make a standalone high-density audio codec package.