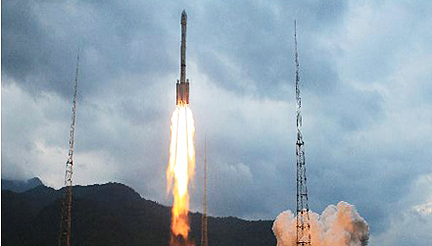 Chang'e-2 launch, photo courtesy of Xinhua.
Scientists successfully activated the attitude control engines on Chang'e-2 and trimmed the satellite for the first time on its journey, according to a flight control official in Beijing. Chang'e-2 blasted off on a Long-March-3C carrier rocket from the Xichang Satellite Launch Center, in southwest China's Sichuan Province, at about 7 p.m. Friday. It is China's first unmanned spacecraft to be boosted from the launch site directly to the earth-moon transfer orbit, greatly reducing the journey time from that of its predecessor Chang'e-1, which required about 13 days to travel to a lunar orbit after orbiting the earth in a geosynchronous orbit and then transferring to the earth-moon transfer orbit. Chang'e-2 is expected to travel for about 112 hours, or almost five days, to arrive in a lunar orbit.

To acquire more detailed moon data, Chang'e-2 will enter a lower lunar orbit about 100 km above the surface, compared with the 200-km altitude of Chang'e-1, according to the control center. The satellite will eventually be maneuvered into an orbit just 15 kilometer above the moon. At that point, Chang'e-2 will take pictures of moon's Bay of Rainbows area, the proposed landing ground for Chang'e-3, with a resolution of 1.5 meters. The resolution on Chang'e-1's camera was 120 meters, said Wu Weiren, chief designer of China's lunar orbiter project. (Source: Xinhua.)