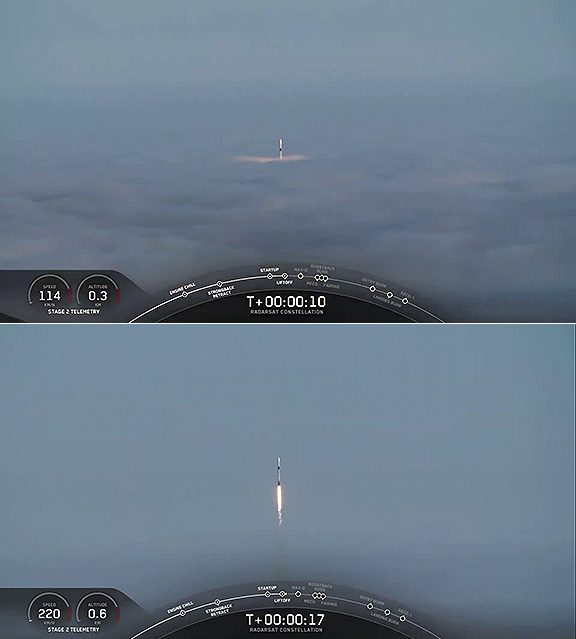 The repurposed SpaceX Falcon 9 launch vehicle lifts off with the Canadian Radarsat Constellation payload from Vandenberg AFB in California. Image is courtesy of SpaceX.

In addition, the Dragon's stage one plowed back through the fog, accompanied by a sonic boom, and landed securely on SpaceX's Landing Zone 4 (LZ-4) at Vandenberg. Falcon 9’s first stage for launch of this RADARSAT Constellation Mission previously supported Crew Dragon’s first demonstration mission in March of 2019.

The RADARSAT Constellation Mission (RCM) is the evolution of the RADARSAT Program and builds on Canada’s expertise in Earth Observation (EO) from space. It consists of three identical C-band Synthetic Aperture Radar (SAR) EO satellites.

Built by MDA, a Maxar company, the three-satellite configuration of the RCM will provide daily revisits of Canada's vast territory and maritime approaches, including the Arctic up to four times a day, as well as daily access to any point of 90 percent of the world's surface. The RCM will support the Government of Canada in delivering responsive and cost-effective services to meet Canadian needs in areas such as maritime surveillance, ecosystem and climate change monitoring as well as helping disaster relief efforts. 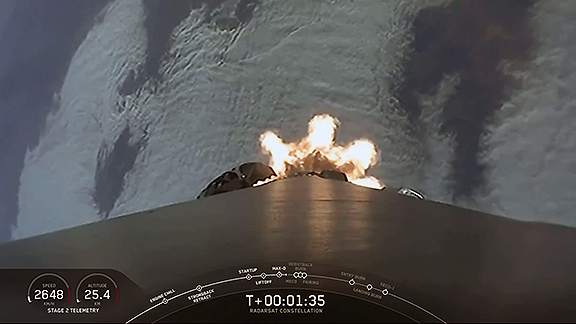 The Falcon 9 liftoff continues on course from Vandenberg AFB. Image is courtesy of SpaceX.

SpaceX’s Space Launch Complex 4E at Vandenberg Air Force Base has a long history dating back to the early 1960s. Originally an Atlas launch pad activated in 1962, SLC-4E was in active use until its last Titan IV launching in 2005.

The Falcon 9 first stage rocket's landing burn through the fog to settle back on the pad at Vandenberg AFB. Images are courtesy of SpaceX.

SpaceX’s groundbreaking was in July of 2011 and extensive modifications and reconstruction of the launch pad were completed 17 months later. SLC-4E consists of a concrete launch pad/apron and a flame exhaust duct. Surrounding the pad are RP-1 and liquid oxygen storage tanks and an integration hangar.

Before launch, Falcon 9’s stages, fairing and the mission payload are housed inside the hangar. A crane/lift system moves Falcon 9 into a transporter erector system and the fairing and its payload are mated to the rocket. The vehicle is rolled from the hangar to the launch pad shortly before launch to minimize exposure to the elements.