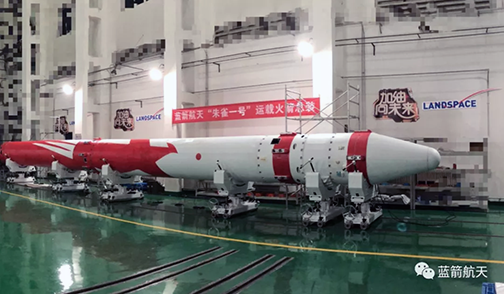 The assembly of the Landspace Zhuque-1 three-stage, solid-fueled launch vehicle in August of 2018.

Photo is courtesy of Landspace.

Launch company Landspace is nearing the first-ever Chinese orbital launch of a privately-developed rocket following assembly and testing of its Zhuque-1 launch vehicle.

Zhuque-1 was expected to launch in the final quarter of 2018, with liftoff now looking likely to occur in October. Aboard will be a small satellite named Future (Weilai-1) for China Central Television (CCTV), which will carry out remote sensing and feature in a TV show.

According to Chinese state media, the rocket will be launched from the Jiuquan Satellite Launch Centre in northwest China. In September, another company, OneSpace, will launch the first private suborbital rocket from Jiuquan, following its debut launch in May from a site in northwest China.