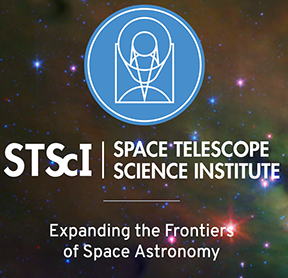 NASA has awarded a contract to the Space Telescope Science Institute (STScI) in Baltimore, Maryland, for the Science Operations Center (SOC) of the Wide Field Infrared Survey Telescope (WFIRST) mission.

WFIRST is a NASA observatory designed to settle essential questions in a wide-range of science areas, including dark energy and dark matter, and planets outside our solar system.

WFIRST was ranked as the highest scientific priority for a large space astrophysics mission in the Decadal Survey conducted by the National Research Council in 2010. The launch of WFIRST is planned for the mid-2020s. To be located one million miles beyond Earth, WFIRST's prime mission will last for five years. 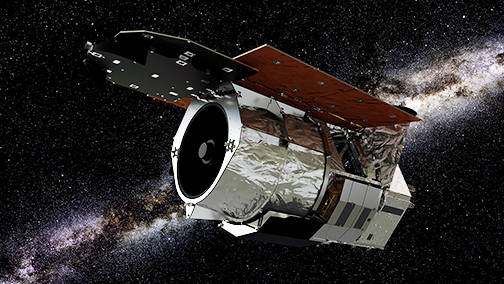 Artistic rendition of the Wide Field Infrared Survey Telescope (WFIRST) spacecraft against a starry background. WFIRST is a Hubble-sized telescope planned for launch in the mid-2020s.

Photo is courtesy of NASA/GSFC.

STScI is the science operations center for both the Hubble and upcoming James Webb Space Telescope. Its expertise with these great observatories puts the Institute in a unique position to support cutting-edge astronomical research well into the future. STScI was established in 1981 on the Johns Hopkins University campus, and is operated by the Association of Universities for Research in Astronomy (AURA).

AURA/STScI will join a team led by NASA's Goddard Space Flight Center in Greenbelt, Maryland, which manages the WFIRST mission for NASA. The team also includes the Jet Propulsion Laboratory (JPL) in Pasadena, California; the Infrared Processing and Analysis Center (IPAC), also in Pasadena; a science team comprised of members from U.S. research institutions across the country, including STScI astronomers; and various industrial and international partners.

The WFIRST observatory will follow on the legacy of the Hubble Space Telescope. WFIRST has the same-sized mirror, but will have a wide-field view of the universe in near-infrared light. Sharp exposures of millions of far-flung galaxies will be done in a fraction of the time that it would take with Hubble. WFIRST's deep-space view will cover 100 times the area of sky as Hubble.

In addition to having a wide-field camera, WFIRST will have a coronagraph to block out the glare from a star to look for accompanying planets. This technology demonstrator is expected to find exoplanets, and also pave the way for many of the large space-based missions being studied for the 2030s and beyond, that will directly image Earth-like exoplanets.

WFIRST will begin operations after traveling to a gravitational balance point known as Earth-Sun L2, which is located about one million miles from Earth in a direction directly opposite the Sun.

STScI Deputy Director Nancy Levenson said the company is looking forward to the scientific power that WFIRST will provide to the entire astrophysics community. The data sets will be large, accessible to all, and open to support exploration of multiple facets of the universe. Science research with WFIRST will work in synergy with and complement Webb and extraordinarily powerful new ground-based telescopes going into operation in the 2020 decade. This promises to open a remarkable new era of astrophysics.

STScI WFIRST Mission Scientist Karoline Gilbert added the WFIRST mission promises to discover thousands of extrasolar planets, survey millions of galaxies, and image billions of individual stars. The research collectively will encompass galactic and stellar populations, environments, evolution, and demographics across all of astrophysics. Interesting objects discovered by WFIRST can later be studied in more detail by the Webb telescope.

Arfon Smith, the STScI Data Science Mission Head noted that the Barbara A. Mikulski Archive for Space Telescopes (MAST) at STScI already holds the astronomical data from some 20 astronomy missions. The addition of the WFIRST data, including new cloud-based products to support data analysis, will add considerably to its scientific discovery potential for present and future generations of astronomers.

Roeland van der Marel, the STScI WFIRST Mission Head, commented that WFIRST will offer the world's astronomers a unique mixture of new capabilities for large surveys, pointed guest-observer science, and archival research. STScI will leverage its expertise in these areas from Hubble, Webb, and other missions — the discoveries will be unprecedented.