The rover, roughly the size of a shoebox and weighing in at under five pounds, can carry its own payloads or team up with other CubeRovers as “scouts” for larger rovers and landers. The Tipping Point award will provide the final push to bring the CubeRover product line to market. The first CubeRover will fly to the Moon aboard the Peregrine lunar lander on Astrobotic’s flagship mission in 2021, set to be the first by an American-built lander since Apollo. 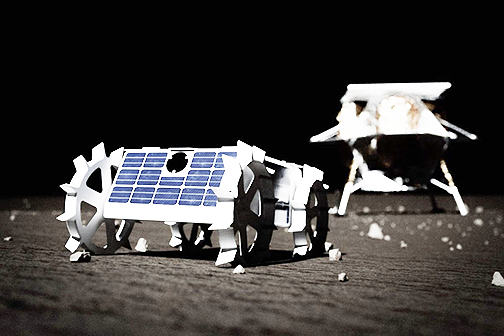 CubeRover has been developed in collaboration with Carnegie Mellon University and the NASA Kennedy Space Center with partial funding from NASA’s Small Business Innovation Research program. Named for its unique modular, scalable design, CubeRover offers a low-cost delivery service to the lunar surface, making the Moon accessible to commercial customers for the first time.

CubeRover is the only rover of the 14 technologies selected by NASA for Tipping Point awards. The awards invest in American aerospace businesses whose products are at the “tipping point” in their development, such that NASA funding could provide the final nudge to bring the product to maturity for use by both NASA and the commercial market. They support the agency’s greater Artemis program and Moon to Mars exploration strategy, aimed at sending the first woman and next man to the Moon and beyond.

The Tipping Point contract will allow CubeRovers to be outfitted with a lighter all-wheel-drive system, a larger solar array for recharging, and standardized interfaces for coupling with a wide variety of lander and payload types. In addition, Astrobotic will partner with the NASA Jet Propulsion Laboratory to bestow CubeRover with a smart vision system that can adapt its resolution to the task at hand – providing high definition for critical science targets and lower definition for routine navigation – to preserve bandwidth, a precious commodity for lunar operations.