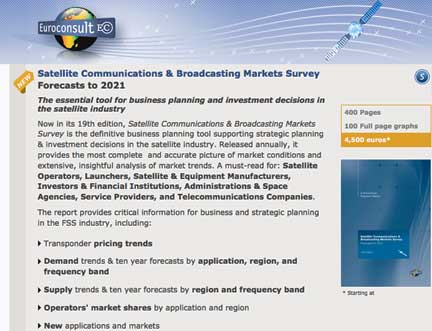 “The FSS industry is growing significantly despite the global financial crisis. We’ve entered the seventh consecutive year of operating margin growth, and the weighted average adjusted EBITDA margin jumped to 75 percent for FSS operators disclosing results,” noted Pacôme Revillon, CEO at Euroconsult. “However, the variety of operators investing in new capacities, particularly in emerging regions, is creating a highly competitive environment. Diverging trends could be observed in the differences regions, with risks of oversupply and capacity pricing rising in certain areas. Africa, Asia and Latin America should still continue attract more strategic investors in the coming years.”

Video distribution represented almost half of all transponder demand in 2011. The majority of markets in emerging regions presented growth rates of at least 5-6 percent with double-digit growth in certain cases. Euroconsult anticipates that overall video distribution capacity demand in established markets will continue to remain stable over the next five years.

More and more global and regional operators are investing beyond their borders, increasing competition in the Middle East, Africa and Southeast Asia. From the additional 240-plus transponders leased in 2011, over 90 percent were sold in emerging regions. However, market growth in the emerging regions has somewhat slowed down compared to previous years. New countries are expected to launch their first satellites in the next two to three years, such as Bolivia and Ukraine.

While growth in regular capacity is currently led by emerging regions, progress in the use of HTS capacity is more spread across established markets, with North America at the top of the list. Euroconsult notes that the HTS market is still in an early stage in other regions and its impact on regular capacity leases will be tested in the next three to five years. The balance between supply and demand can significantly change in the next three years in several world regions, resulting in competitive pressure among operators.