Mars Orbiter Gets The ReBoot 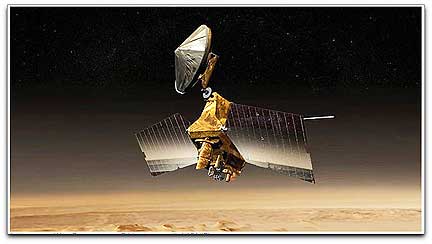 NASA's Mars Reconnaissance Orbiter is in safe mode and in communications with Earth after an unexpected rebooting of its computer Wednesday evening, June 3rd.

The spontaneous reboot resembles a February 23rd event on the spacecraft. Engineers concluded the most likely cause for that event was a cosmic ray or solar particle hitting electronics and causing an erroneous voltage reading. Jim Erickson, Mars Reconnaissance Orbiter project manager at NASA's Jet Propulsion Laboratory, Pasadena, California, said, "The spacecraft is sending down high-rate engineering data, power positive, batteries fully charged, sun pointed and thermally safe. The flight team is cautiously bringing the orbiter back to normal operations. We should be resuming our exploration of Mars by next week." The reboot occurred at approximately 6:10 p.m. PDT (9:10 p.m. EDT) on June 3rd. This is the sixth time since the spacecraft began its primary science phase in November 2006 that it has entered safe mode, which is its programmed precaution when it senses a condition for which it does not know a more specific response.