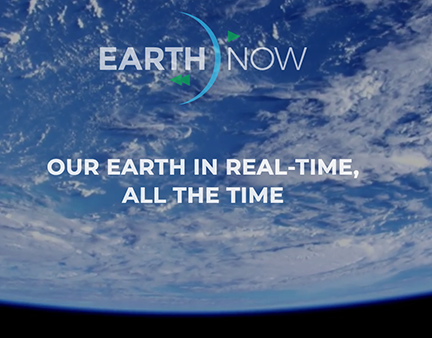 EarthNow LLC intends to deploy a large constellation of advanced imaging satellites that will deliver real-time, continuous video of almost any location on Earth.

The latest company to spin-out from Intellectual Ventures, EarthNow recently closed a first round of financing with investments from Airbus, the SoftBank Group, Bill Gates, and Greg Wyler. The initial funding focuses primarily on maturing the overall system design to deliver innovative and unique real-time Earth observation services.

EarthNow represents a dramatic leap forward in capability compared to other Earth Observation (EO) satellite systems which deliver pictures and sometimes video clips to users many minutes, hours and even days after they are requested.

EarthNow takes advantage of an upgraded version of the satellite platform, or “bus,” developed originally for the OneWeb communications service. Each satellite is equipped with an unprecedented amount of onboard processing power, including more CPU cores than all other commercial satellites combined.

Airbus plans to mass-produce the satellites using their advanced production lines in Toulouse and Florida. “Airbus has a unique heritage in design, manufacture and operation of Earth Observation satellite systems and would certainly be a valuable partner in this program,” said Nicolas Chamussy, Head of Space Systems at Airbus.

Initially, EarthNow will offer commercial video and intelligent vision services to a range of government and enterprise customers. Applications include catching illegal fishing in the act, watching hurricanes and typhoons as they evolve, detecting forest fires the moment they start, watching volcanoes the instant they start to erupt, assisting the media in telling stories from around the world, tracking large whales as they migrate, helping “smart cities” become more efficient, providing on-demand data about crop health, and observing conflict zones around the world. In parallel, EarthNow plans to create compelling “live Earth video” mass market applications that can be accessed instantly from a smartphone or tablet. “We are excited by the prospect of giving everyone a stunningly-beautiful real-time window on your world from space. With EarthNow, we will all become virtual astronauts,” said Hannigan.

According to Greg Wyler, Founder and Executive Chairman of OneWeb, the company created the world’s first low-cost, high-performance satellites for mass-production to bridge the digital divide. These very same satellite features will enable EarthNow to help humanity understand and manage its impact on Earth.

According to EarthNow’s founder and CEO, Russell Hannigan, EarthNow is ambitious and unprecedented, but our objective is simple; we want to connect you visually with Earth in real-time. With existing systems, users can see only what has happened in the past. With EarthNow’s constellation of satellites, you will see events unfold as they happen in real-time. EarthNow believes the ability to see and understand the Earth live and unfiltered will help all better appreciate and ultimately care for this one and only home.