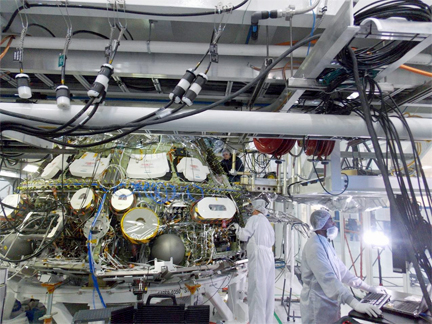 After powering on and sending commands to more than 20 different critical systems installed on the spacecraft’s crew module, NASA and Lockheed Martin engineers have verified the avionics for Exploration Flight Test-1 (EFT-1) are ready to support a successful flight and re-entry of the spacecraft.

Following the initial power on of the Vehicle Main Computer in October, engineers have since methodically installed additional harnessing, wiring and electronics onto the crew module—completing the avionics system that serves as the eyes, ears and brains of the spacecraft. During these tests, engineers one-by-one activated and sent commands to the pyrotechnics, batteries, thermal control, cameras, guidance and navigation, propulsion, and environmental control life support systems, all while evaluating signal quality, on-board system responses, and data production.

“Each and every one of these systems is critical to mission success and they must perform flawlessly to ensure the safety of future crews,” said Cleon Lacefield, Lockheed Martin Orion program manager. “Now that we’ve finished functional testing, the team will conduct performance testing and turn on all the systems at once, simulating the spacecraft’s operations during EFT-1.”

During Orion’s test flight, the uncrewed spacecraft will launch on the Delta IV Heavy and will travel 3,600 miles beyond low Earth orbit. That same day, Orion will return to Earth at a speed of approximately 20,000 mph for a splashdown in the Pacific Ocean. EFT-1 will provide engineers with critical data about Orion's heat shield, flight systems, and capabilities to validate designs of the spacecraft before it begins carrying humans to new destinations in deep space.