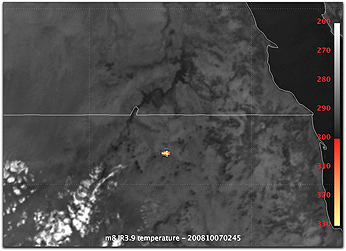 A rare series of events occurred early Tuesday morning, October 7, as asteroid 2008 TC3 hit Earth releasing a huge amount of light and energy before exploding in the atmosphere over northern Sudan. Even better is that amazingly, the Meteosat-8 Rapid Scanning Service managed to capture the impact.

This brief flash was captured by Meteosat-8 in Rapid Scan Service, as the image to the right shows. The asteroid 2008 TC3, entered the Earth's atmosphere at a velocity of 12.8 kilometers per second at around 02:46 UTC above northern Sudan, Africa. As it entered the Earth’s atmosphere, it compressed the air in front of it. The compression heated the air, which in turn heated the object to create a spectacular fireball, releasing huge amounts of energy as it disintegrated and exploded in the atmosphere, dozens of kilometers above ground. The asteroid exploded with the energy of around one kiloton, equal to the power of a small nuclear bomb. Infrasound detector arrays in Kenya also detected a sound wave from the direction of the expected impact corresponding to the energy of 1.1-2.1 kilotons of TNT.

2008 TC3 was discovered on October 6 by astronomers using the Mt. Lemmon telescope in Arizona as part of the NASA-funded Catalina Sky Survey for near-Earth objects. Asteroids the size of 2008 TC3 hit Earth a few times a year, but what is special about this event is that it is the first time one has been discovered before it hit. The estimated time of arrival was also precise. At 01:45 UTC, JPL scientist Paul Chodas announced, "We estimate that this object will enter the Earth's atmosphere at around 2:45:28 UTC and reach maximum deceleration around 2:45:54 UTC at an altitude of about 14 km. These times are uncertain by +/-15 seconds or so." 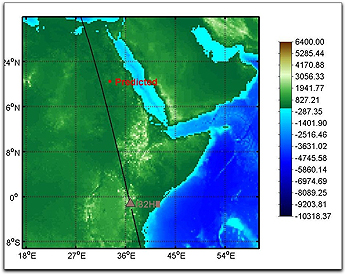 The saga gets even better . . .The figure on the left shows the predicted impact point. (Credit: Peter Brown, University of Western Ontario). Half an hour before the predicted impact, Jacob Kuiper, general aviation meteorologist at the Koninklijk Nederlands Meteorologisch Instituut (KNMI), the Dutch weather service, informed an official of Air France-KLM at Amsterdam airport about the possibility that crews of its airliners in the vicinity of the impact would have a chance of seeing a fireball. And it was a success! A KLM airliner roughly 1,400 km south-west of the predicted atmospheric impact position observed a short bright flash just before the expected impact time. The images taken by Meteosat-8 confirm that the asteroid entered the atmosphere exactly as estimated.
Topical Tags :
Agencies
Regional Tags :
Middle East/Africa
Global