Known as Danielé and Alizée, another two Galileo FOC* satellites developed and built by OHB System AG have been successfully launched on board a Soyuz launcher, which lifted off from the Kourou space center in French-Guiana today at 10:48 CEST on May 24. 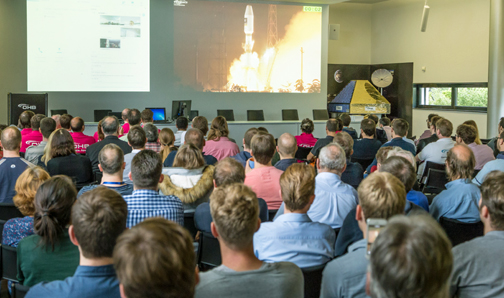 The conference hall in Bremen, German, where OHB colleagues watched the Galileo launch by Arianespace in Kourou, French Guiana.

Photo is courtesy of OHB.

Less than four hours later, the satellites reached their planned orbit at an altitude of around 23,000 kilometers. Shortly after, they sent their first sign of life to the ESOC Control Center in Darmstadt. Over the next few days, the two satellites will be undergoing preliminary function testing.

Executive board member, Dr. Ingo Engeln, who is responsible for navigation, said, “Following the successful initialization, a stable connection with the two satellites has been established and the solar panels have been unfolded and correctly aligned towards the sun. All the previously launched Galileo FOC satellites have already demonstrated their full functional and performance capabilities. Our satellite production in Bremen and environmental tests in Noordwijk are proceeding according to schedule.”

In the coming week, the Galileo control center in Oberpfaffenhofen will take over responsibility for controlling Danielé and Alizée on behalf of ESA and the European Commission. Later on also the payloads supplied by SSTL will be set in operation from Oberpfaffenhofen. OHB System AG, being the industrial prime contractor, is responsible for supplying a total of 22 Galileo FOC navigation satellites. This successful launch brings the number of OHB-built satellites in orbit to a new total of ten, with a further 12 to follow. OHB in Bremen is using seven islands in parallel for the production of the Galileo FOC satellites.

OHB System AG is one of the three leading space companies in Europe and is owned by Bremen-based listed, high-tech group OHB SE, where around 2,000 specialists and executives work on key European space programs. With more than three decades of experience, OHB System AG specializes in high-tech solutions for space. This includes low-orbiting and geostationary satellites for Earth Observation (EO), navigation, telecommunications, science and space exploration, as well as systems and experiments for human space flight.