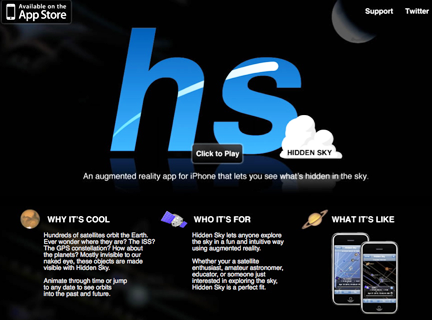 The company has just released Hidden Sky, a first of its kind augmented reality app for the iPhone that lets users track any of the thousands of satellites that orbit the Earth, as well as the planets and other objects in the sky. Track the Hubble Space Telescope, the ISS, or recently newsworthy satellites such as the Galaxy 15 or CubeSat XI-V through the sky; users will see the orbits fade in and out into the past and future — even watch a newly launched spacecraft dock with the ISS above, as is revealed in the highly recommended video accessible at the following web URL... http://www.youtube.com/watch?v=nSmO0eEaIKI.

Hidden Sky is astrodynamically correct; its orbit propagation parameters are obtained from NORAD. It's a cut above "dish pointing" apps that only support geostationary satellites, and with the inclusion of the Sun, Moon, and planets, Hidden Sky bridges the gap between astronomy and satellite tracking. The app opens up new possibilities for space education. The augmented reality experience provides an exciting way for people to learn about satellites and our solar system. In addition to obtaining pertinent information such as a satellite's position, users can watch that satellite move across the sky, bringing those numbers to life. Space professionals and enthusiasts alike can easily benefit from seeing satellites in this entirely new way.