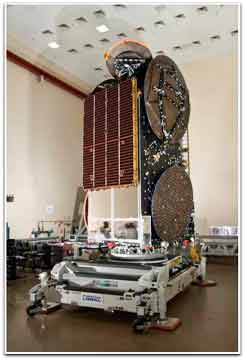 Space Systems/Loral (SS/L) has announced that NSS-12, a satellite built for SES WORLD SKIES, a subsidiary of SES (Euronext Paris and Luxembourg Stock Exchange:SESG), is successfully performing post-launch maneuvers. The satellite deployed its solar arrays Thursday evening, following its launch aboard an Ariane 5 rocket from the European Spaceport in Kourou, French Guiana. The satellite's first thruster firing will propel it toward its final geosynchronous orbit.

When in-orbit testing is completed, NSS-12 will replace NSS-703 at 57 degrees East, where it will reach an estimated two-thirds of the world's population. Based on the SS/L 1300 platform, it is the most powerful satellite in the SES fleet and it will enable communications for telecommunications providers, broadcasters, corporations, and governments in four continents.