Just Beyond Our Solar System Is A Planet That's Hotter'n... 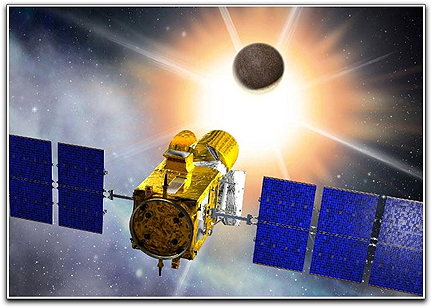 A rocky planet, 5x larger than the Earth, has been found beyond the solar system — such was reported by researchers on Wednesday at a meeting in Spain. Astronomer Artie Hatzes stated the planet has a composition quite similar to Earth, but is far hotter as it is so close to the star it orbits. Project leader Didier Queloz of Geneva Observatory in Switzerland said "the place may well look like Dante's Inferno, with a probable temperature on its 'day face' above 3,600 degrees Fahrenheit (2,000 degrees Celsius) and minus-328 degrees Fahrenheit (minus-200 degrees Celsius) on its night face." The planet, known as CoRoT-7b, is about 500 light years away from Earth in the constellation of Monoceros, the Unicorn, the report said and was first detected early last year by the European Space Agency's CoRoT satellite. The findings will be published in a special issue of the Astronomy and Astrophysics journal on October 22nd.