[SatNews] The European Commission has proposed a new framework for the financing and governance...

...of the two European satellite navigation programs Galileo and EGNOS (GPS signal augmentation) for the period 2014-2020. The Commission proposes to earmark 7.0 billion euros to guarantee the completion of the EU satellite navigation infrastructure and to ensure the exploitation of the systems until 2020, such as the operations of the space and terrestrial infrastructures, the necessary replenishment/replacement activities, certification procedures, and notably the provision of services. The proposal also recalls that the Union remains the owner of the systems. Therefore, the management of the programs' exploitation should be delegated to the European GNSS Agency while management of the programs' deployment should be delegated to the European Space Agency. 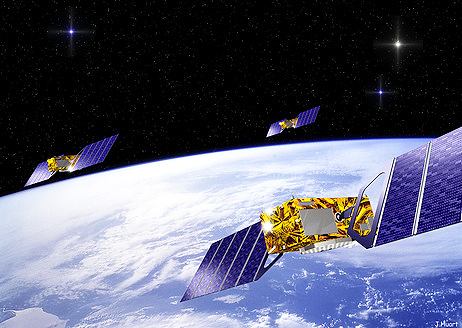 An artistic impression of the Galileo satellite system.

Galileo will allow users to know their exact position in time and space, just like GPS, but with greater precision and reliability. Galileo is the pProgramme of the European Union to develop a global satellite navigation system under European civilian control. It will be compatible and, for some of its services, interoperable with the American GPS and Glonass (Russia), but independent from them.

In 2014 Galileo will offer three services:

Further services to follow later will include a Commercial Service and a Safety-of-Life Service for higher accuracy authenticated data and use in life-critical applications. Galileo recently took a huge leap forward on 21st October with the launch of the first two operational Galileo satellites. A second launch of a further two Galileo operational satellites is foreseen in 2012. This success paves the way to the provision of Galileo's initial services in 2014.

The EU system and those from China, the United States, Russia, Japan and India are compatible, but this requires constant discussions with each nation and within a UN context. Norway participates and has contributed to the funding of the program, and there are on-going negotiations with Switzerland.