[SatNews] An instrument that will explore the surface of a primitive asteroid in search of water and organic materials has arrived at Lockheed Martin Space Systems in Denver for installation onto NASA’s Origins, Spectral Interpretation, Resource Identification, and Security–Regolith Explorer (OSIRIS-REx). 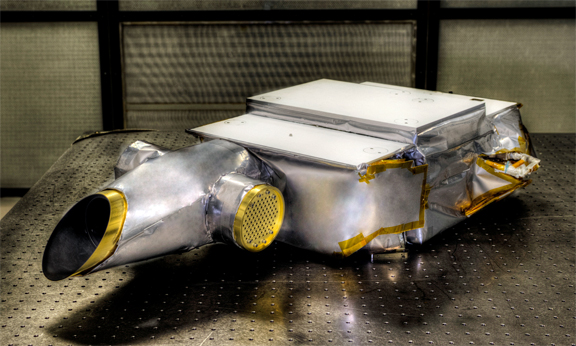 The OSIRIS-REx Visible and Infrared Spectrometer (OVIRS) will measure visible and near infrared light from the asteroid Bennu. The instrument's observations could be used to identify water and organic materials. This image shows OVIRS at NASA's Goddard Space Flight Center in Greenbelt, Maryland, where it was built, prior to shipping to Lockheed Martin Space Systems in Denver.

OVIRS, a point spectrometer, will split the light from the asteroid Bennu into its component wavelengths, similar to a prism that splits sunlight into a rainbow, but over a much broader range of wavelengths. Different chemicals have unique spectral signatures by absorbing sunlight and can be identified in the reflected spectrum. The spectra provided by the instrument will help guide sample site selection. After thorough testing with the spacecraft on the ground, the instrument will be powered on for check-out shortly after launch, with first science data collected during the Earth gravity assist in September 2017. 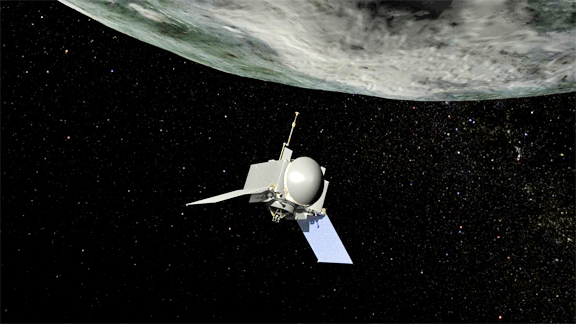 OSIRIS-REx is the first U.S. mission to return samples from an asteroid to Earth for study. The mission is scheduled for launch in September 2016. It will reach its asteroid target in 2018 and return a sample to Earth in 2023. The spacecraft will travel to a near-Earth asteroid, called Bennu and bring at least a 2.1-ounce sample back to Earth for study. The mission will help scientists investigate the composition of the very early solar system and the source of organic materials and water that made their way to Earth, and improve understanding of asteroids that could impact our planet.

“The delivery of OVIRS to the spacecraft means the mission now has the capability to measure the minerals and chemicals at the sample site on Bennu,” said Dante Lauretta, principal investigator for OSIRIS-REx at the University of Arizona, Tucson. “I greatly appreciate the hard work and innovation the OVIRS team demonstrated during the creation of this instrument.”

"The OVIRS team has met all of their technical requirements," said Mike Donnelly, OSIRIS-REx project manager at NASA’s Goddard Space Flight Center in Greenbelt, Maryland. “This is another step in completing the spacecraft and sending it on its way to rendezvous with the asteroid Bennu."

“Through the team’s efforts, OVIRS has become a remarkably capable instrument which we expect to return exciting science from the asteroid, Bennu,” said Dennis Reuter, OVIRS instrument lead from Goddard.