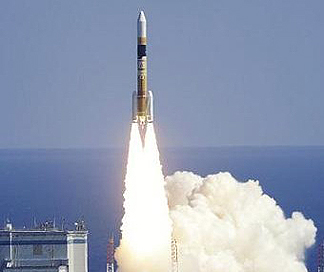 Photo of the H-2a launch with the Optical-4 satellite aboard.
[SatNews] This new launch by Japan is of military ilk...

Japan has launched a new Information Gathering Satellite (IGS) known as Optical-4, via their H-2A (H-IIA) launch vehicle. Given the military nature of the payload, only amateur footage of the launch was available, although it did show the vehicle successfully lifted off from the Yoshinobu Launch Complex at the Tanegashima Space Center (TNSC) at 04:36 UTC on Friday.

The launch vehicle (F-19) used was the 202 version of the H-2A rocket equipped with two solid rocket boosters and likely with the 4S fairing design (4 meters in diameter). Mitsubishi Heavy Industries, Ltd. is charged as the launch service provider for the H-IIA. The H-2A can be launched in various configurations by installing additional solid rocket boosters. Its first stage has a length of 37.2 meters, a diameter of 4 meters and a mass of 114 tons. The stage burns a mixture of liquid oxygen and liquid hydrogen, developing a liftoff thrust of 1,098 kN. Its burning time is of 390 seconds.

The H-2A is capable of launching a cargo of 2.000 kg to a Geosynchronous Transfer Orbit (GTO), 10.000 kg to a Low earth Orbit with a Inclination of 30 degrees, 4.000 kg to a Sun Synchronous Orbit or 2.500 kg to a planetary mission. Originally set to launch in August, the mission was delayed until September 17 due to an issue with the launch vehicle’s range safety system (receiver). A local typhoon delayed the launch further, prior to the vehicle lifting off into blue skies on Friday.

The Information Gathering Satellite (IGS) is a military spy satellite system, which was designed as a response to North Korea’s 1998 missile test over Japan. Its primary mission is to provide early warning of impending hostile launches. During their mission, the pairing of satellites allowed them to fly on a 492 km orbit at a separation distance of 37 minutes, as they made passes over the North Korean capital each day. However, this opening duo of satellites in this IGS range – the 1A and 1B – were incapacitated four years after their March 28, 2003 launch – also via a H-IIA vehicle – as one of the pair lost its radar ability. 1B is expected to suffer from an uncontrolled re-entry in 2012 or 2013. They had expected to be joined by a second pair of IGS satellites – 2A and 2B. However, they were both lost via the H-IIA launch failure of November, 2003.

ISG 4B has since been incapacitated, due to an inability to carry out its monitoring functions. A fourth optical satellite – IGS 5A – was launched on November 28, 2009, advancing the resolution ability when compared to the previous satellites. No specific details were released on this latest IGS satellite, known only as Optical-4, although unconfirmed reports claim it was successfully separated after its ride uphill on the H-2A.