Direct link to Prisma Satellites homepage...
[SatNews] Separation can be a tough experience... save for these two satellites — it's all part of a plan.

The Swedish Space Corp.'s PRISMA satellites, named Tango and Mango, successfully separated from one another earlier today. The satellites were launched on June 14th aboard a Dnepr launch vehicle from Yasny, Russia (see SatNews story at http://www.satnews.com/cgi-bin/story.cgi?number=1938607700. Both satellites are part of the PRISMA project, which was established in early 2005 when SSC formulated a mission concept that consisted of two satellites and a series of experiments in order to test formation flying and rendezvous technology in a real space mission. The formation flying and rendezvous technology was selected because it represents techniques which are crucial in any upcoming multi-satellite mission. Formation Flying, the discipline to maneuver several spacecraft as one entity with a high level of autonomy, has several promising applications, such as building large antennas and telescopes using interferometer techniques. 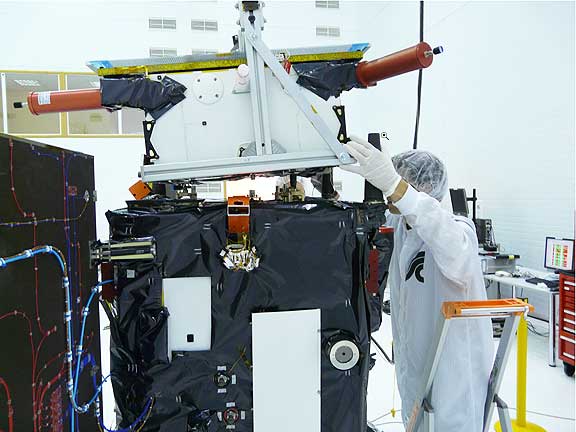 Tango (top) and Mango (bottom) are mated into their launch configuration in May of this year. Photo is courtesy of SSC.

Mango is a 331 pound satellite that is about the size of a kitchen stove and Tango weighs in at 88 pounds with the dimensions of a microwave. To demo Formation Flying, the satellites will approach one another from extended distances, relying upon navigation instruments to calculate positioning — in some of the spatial exercises, they will be within three feet of one another. Various payloads from European suppliers are included in this PRISMA mission, including GPS from Germany, vision-based navigation sensor from Denmark, an RF instrument from France, and autonomous rendezvous technology from Sweden.