[SatNews] Globalstar, Inc. (Nasdaq:GSAT), has announced that it has petitioned the Federal Communications Commission (FCC or Commission) to obtain...

...the regulatory flexibility necessary to use its licensed MSS spectrum terrestrially to support mobile broadband applications throughout the United States. The highlights of the filing include:

—Globalstar proposes two separate but complementary terrestrial service offerings over its exclusively licensed Big LEO spectrum—a long term LTE-based service over the entirety of its spectrum and a near term terrestrial low power service (TLPS) offering over its 2.4GHz spectrum band
—Near term, Globalstar seeks rule changes to allow the provision of TLPS within its spectrum at 2483.5-2495MHz (AWS-5) and adjacent unlicensed Industrial, Scientific, and Medical Equipment (ISM) spectrum at 2473-2483.5MHz
—This innovative use of the combined 22MHz of spectrum for TLPS would help alleviate the increasing congestion that is impeding existing 802.11 ISM channels (Wi-Fi) in many areas. In effect, TLPS would increase the available Wi-Fi capacity in the United States by 33 percent
—As part of offering TLPS, the Company commits to deploy 20,000 free TLPS access points in the nation's public and non-profit schools, community colleges and hospitals. Further, Globalstar agrees to provide its mobile satellite services free of charge to its customers in any federally declared disaster area following a natural or man-made disaster
—Long term, Globalstar seeks authority to construct and operate a Long Term Evolution (LTE) system within its Big LEO spectrum, after an open and transparent rulemaking proceeding to resolve any technical issues


Globalstar expects that the FCC will move quickly to put its petition out for public notice, receive comments and then initiate the requested rulemaking. This procedure is similar to the process the FCC employed to address DISH Network's request for terrestrial relief earlier this year. 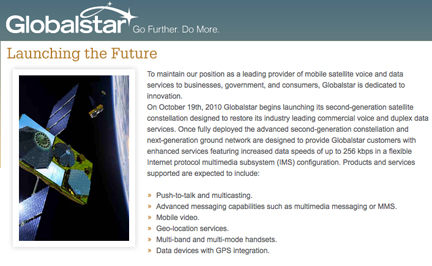 "We look forward to working with the Commission as our petition progresses," said L. Barbee Ponder IV, General Counsel & Vice President-Regulatory Affairs for Globalstar. "This petition would place an additional 22 MHz into the national broadband inventory near term while leveraging existing handset technology and infrastructure. As a Globalstar officer, I was incredibly gratified to learn that we were able to support first responders and emergency personnel in the areas hardest hit by Hurricane Sandy. First responders and emergency personnel can rely upon our duplex service to receive critical communications when all other means of terrestrial communications failed regardless of the nature of the emergency. For this reason, we have included in our FCC petition our commitment to provide MSS free of charge to our customers in any federally declared disaster area. Given recent public statements made by Chairman Genachowski and the other Commissioners, we believe that the FCC will proceed expeditiously through this process."

"As Globalstar completes the deployment of its second-generation constellation and once again provides industry-leading voice and service quality, we are ready to do more to meet the needs of an economy with high demands for data-intensive applications" said Jay Monroe, Chairman and Chief Executive Officer of Globalstar. "Given that our spectrum is adjacent to existing Wi-Fi frequencies, we are uniquely suited to help alleviate the current congestion being experienced over Wi-Fi channels. In addition to meeting our core MSS mission and driving value for the enterprise through subscriber growth and the introduction of new products and applications, we can and should be permitted to use our terrestrial spectrum more intensively to meet the ever-increasing demands of consumers."