The EPS-SG system will deliver vital meteorological observations from polar orbit in the 2021-2042 timeframe. This latest landmark in the long-standing cooperation was signed by EUMETSAT’s Director-General, Alain Ratier, and Volker Liebig, ESA’s Director of Earth Observation Programs. 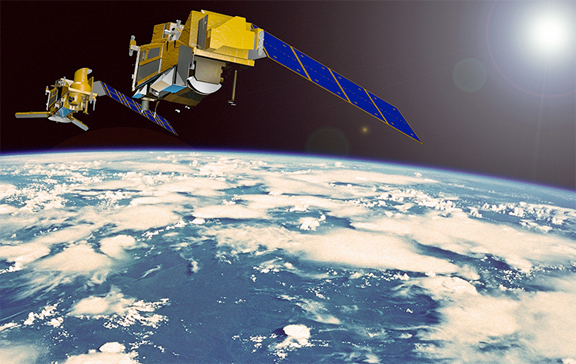 EPS-SG will be operated as a two-satellite system with an atmospheric sounding and optical imaging mission on Metop-SG-A and a microwave imaging mission on Metop-SG-B. Each series will consist of three satellites to provide 21 years of operations. The first A satellite is planned to be launched in mid 2021, followed by the first B satellite 18 months later. Through this agreement, the successful cooperation model that has been developed between the two organisations is formalized for EPS-SG:

Alain Ratier, the EUMETSAT Director-General, said, “With the EUMETSAT Polar System of Second Generation, our ambition is to further increase the accuracy of forecasts of the weather and the environment in the next decades. For this, we need very innovative Metop-SG satellites, not only to improve all observations already available from the current Metop satellites, but also to provide new observations, and we count on ESA to develop these satellites.”

Johann Dietrich Wörner, Director General of ESA, said, “This agreement shows the trust and confidence that the Member States have in the way ESA and EUMETSAT cooperate to make Europe a leader in satellite meteorology. The Metop-SG satellites will maintain Europe’s leading edge in the development of meteorological systems, instruments, technologies and applications, and in the provision of weather forecasting and monitoring services.”