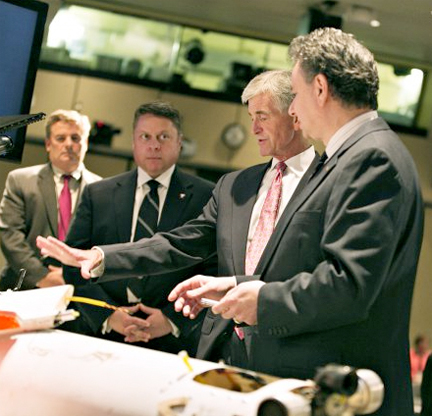 [SatNews] As the military use of unmanned aircraft systems has increased dramatically, including by entities that may pose a threat to the United States, scientists at Picatinny Arsenal are part of the effort to counter potential threats to U.S. armed forces by such systems.

Unmanned aircraft systems, or UAS, is the term to describe a far more advanced "drone" or unpiloted flying object or aircraft used to carry out a military operation. In many cases, unmanned aircraft are used to gather intelligence with cameras and sensors, thus there is a need for the U.S. Armed Forces to have counter measures in place. Such measures may include jamming the electronics from its ground controller or shooting down the system. The UAS challenge has grown exponentially in the last decade as the world's inventory of unmanned aerial systems has grown from approximately 20 system types and 800 aircraft in 1999, to more than 200 system types and approximately 10,000 unmanned aircraft in 2010, said Nancy Elliott, a spokeswoman with the U.S. Army's Fires Center of Excellence,or FCOE, at Fort Sill, Okla. The center of excellence is the Army service lead to counter unmanned aircraft system.

Elliott also said that as the worldwide proliferation of drones continues, the FCOE has produced a counter-UAS concept of operations. The document focuses on the low, slow and small UAS threat and will drive future Army efforts to develop solutions and integrate capabilities while contributing to joint efforts to counter the threat, she added. 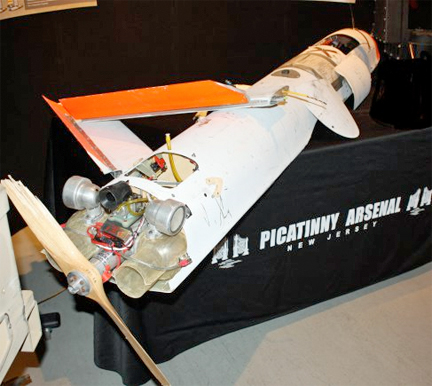 A Small class Unmanned Aerial System defeated by a prototype U.S. Army "gun-launched" munition was on display before the Secretary of the Army John McHugh visited Picatinny Arsenal, N.J., in September of 2013.

Since 2010, the U.S. Army Armaments Research, Development and Engineering Center, known as ARDEC, at Picatinny Arsenal, has been positioning itself as a player in the close-in counter UAS mission by participating in an annual experiment to assess the Department of Defense, inter-agency and private industry capabilities in Counter-Unmanned Aircraft Systems, or C-UAS. In 2012, ARDEC partnered with the Navy's Office of Strategic Systems Programs and successfully demonstrated the capabilities of fire-control radar to detect, track, and characterize UASs. This information was then used to veer a remote weapon station gimbal at the threat UAS, emulating a potential defeat system. Given the success in being able to accurately detect and track unmanned systems, in fiscal year 2013, ARDEC directed its focus on integrating the fire control radar with a variety of current weapon systems that could potentially neutralize the UAS threat.

According to ARDEC Project Officer Hannibal People, ARDEC was proven to be successful with its effort in 2013, since the integrated System of Systems showed as a promising solution after defeating the UAS threat at two different test events. This ability marks the first time a small class UAS has been defeated by a prototype U.S. Army "gun launched" munition using a novel warhead design. The significance of this accomplishment is the potential to provide a single-shot, low-cost-per-kill weapon system that can function in a multi-role capability for both fixed and mobile Army platforms.

Overall, ARDEC proved the viability of its integrated close-in C-UAS capabilities and solidifying a strong foothold for ARDEC's future in the mission space, according to People. The full C-UAS kill chain was demonstrated in a ten month span of effort. People said ARDEC is looking to continue to develop this capability to support the Warfighter's needs.

"We recognize the need to protect dismounted Soldiers as well as combat vehicles within the BCT from inbound UAS threats" said Ted Maciuba, deputy director of the Mounted Requirements Division of the Maneuver Center of Excellence at Fort Benning, Ga.

Annually, the Fires Center of Excellence plans to hold a conference for member of the counter-UAS community to address the growing challenges that unmanned systems pose to the United States and its allies. The first such conference was held a year ago in December. At that gathering, the center introduced its operational concept to counter UAS, discussed the threat, implications to doctrine, organization, training, material development, leadership, facilities, personnel as well as the implications to the Joint Service community and the other Army centers of excellence.