The innovative platform, positioned between the launch booster and a primary space vehicle, is used to carry small payloads or deploy smallsats. Under the contract, Orbital ATK will design and manufacture the LDPE using its ESPAStar™ platform. The award includes the initial LDPE, plus options for two additional systems and adds to the rapidly growing production of ESPAStars that support a wide variety of customer missions. 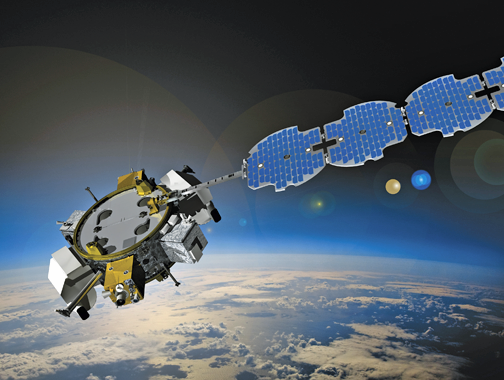 Artistic rendition of the ESPAStar™ platform.
Image is courtesy of Orbital ATK.

ESPAStar uses a modified EELV Secondary Payload Adapter ring as its structure and is capable of being launched aboard any launch vehicle that meets the EELV standard interface specification. It provides a modular, cost effective and highly capable platform for hosting technology development and operational payloads.  ESPAStar leverages work performed on the company-designed ESPA Augmented Geostationary Laboratory Experiment (EAGLE), which successfully demonstrated similar technology for the U.S. Air Force. In addition to EAGLE, two ESPAStars are currently in production for other customers.

ESPAStar provides power, pointing, telemetry, command and control for attached payloads or for small satellites that can be deployed from the vehicle. Built to provide an even greater level of access to space, Orbital ATK’s ESPAStar can accommodate any combination of up to six hosted or 12 separable, free-flyer payloads in low and geosynchronous orbit.

Mike Larkin, the VP and GM for Orbital ATK’s Satellite Systems Division, stated that ESPAStar’s game-changing capability is another example of Orbital ATK’s ability to deliver innovative products that fill a need for customer. Based on Orbital ATK’s flight-proven GEOStar product line the new ESPAStar technology will provide a cost-effective ride to space for secondary payloads and offers maximum flexibility for orbit locations and deployment.