[SatNews] The Idaho Department of Water Resources will soon have more precise and frequent evapotranspiration data from...

...farm fields to develop hydrologic models and base legal decisions on water rights. NASA and the U.S. Geological Survey launched their Landsat Data Continuity Mission February 11th from California's Vandenberg Air Force Base, placing the satellite Landsat 8 in orbit. The Landsat program offers the only satellite capable of taking the high-resolution thermal images needed to map evapotranspiration of individual agricultural fields. Evapotranspiration is the loss of water from the soil surface and from plant leaves. 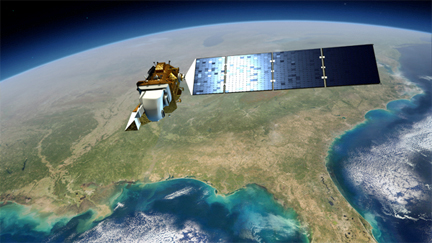 Artistic rendition of Landsat 8 in orbit above Earth.
Landsat 7, which has been in operation since 1999, circles the Earth every 16 days. Adding Landsat 8 will enable IDWR and other users to receive data from a specified point every eight days, providing readings based on more current crop conditions and reducing chances of cloud cover interfering with analysis. University of Idaho Extension water resources engineering professor Rick Allen, who designed the software to convert Landsat data into evapotranspiration maps, said Landsat 8's thermal imager was activated March 7 over Norway for an initial test, and everything appeared to work well. After calibrations are complete, the system will go online for the public by mid to late April. Landsat 8 has two thermal sensors, making it more accurate than Landsat 7.

"It's all new technology, which we are excited about," Allen said. "There are probably 20 different uses of these evapotranspiration maps once we create them." Since water availability correlates with food supply, Allen considers it critical to monitor water consumption with Landsats in developing countries. In southern Idaho, he said Landsat maps show a gradual transition toward high-water feed crops to support the region's growing dairy industry.

Allen would like four Landsats in orbit to pass a given location every four days, a program he estimates would cost $200 million per year to maintain. It costs about $1 billion to build, launch and develop the support network for a single Landsat. In 2012, the Landsat budget was cut from $30 million to $2 million. Budget constraints have already delayed plans for Landsat 9 by at least a year, meaning the earliest timing for another launch would be 2018, Allen said.

Bill Kramber, senior remote sensing analyst with IDWR, said the first Landsat satellite was launched in 1972, and his department began using the data in 1975. In 2000, IDWR began evaluating evapotranspiration maps. "We recently used (Landsat data) in a court case in a water delivery call to show the relative amount of evapotranspiration of fields in a dispute, versus surrounding fields," Kramber said.

He said the U.S. Forest Service and the Bureau of Land Management also use the data to monitor forest and grazing land, and USDA uses it for determining crop maps. Lyle Swank, watermaster over the Eastern Snake Plain, said some water districts review the evapotranspiration maps to monitor water rights, and groundwater districts use them to keep tabs on pumping. (Source: Capital Press, the West's AG Website, story by John O'Connell.)