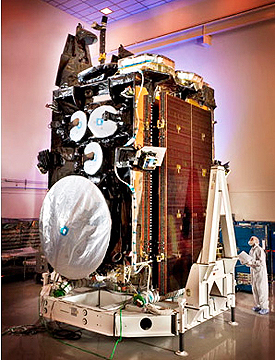 This critical milestone marks the completion of pre-launch verification for the new eXtended Data Rate (XDR) service which will provide substantial enhancements in the capacity, coverage and connectivity of protected communications for warfighters around the globe. AEHF is the successor to the existing five-satellite Milstar constellation and will provide global, highly secure, protected, survivable communications for warfighters operating on ground, sea and air platforms. Completion of IST for the second AEHF satellite marks the culmination of an extensive suite of interoperability tests with new XDR capable user terminals demonstrating protected anti-jam communications at data rates up to 8 Mbps via highly agile satellite spot beams. New and enhanced strategic and tactical applications such as real-time video and voice and data conferencing will be enabled by this XDR service providing a ten-fold increase in system capacity, coverage and network connectivity.

Col. Michael Sarchet, commander of the Protected Satellite Communications Group at the U.S. Air Force's Space and Missile Systems Center said, "This major milestone represents completion of our single-line flow activities and moves the program another critical step closer to the full deployment of the AEHF system and delivery of unprecedented protected communication capabilities to the warfighter." The second AEHF satellite has completed all testing and will be placed in storage next month. The third AEHF satellite is progressing through thermal vacuum environmental testing at the Lockheed Martin facility in Sunnyvale, Calif.