[Satnews] According to China.org.cn, China will conduct more than 20 space missions during 2016, including a manned one and the maiden flights of two rockets, according to the nation's major space contractor. 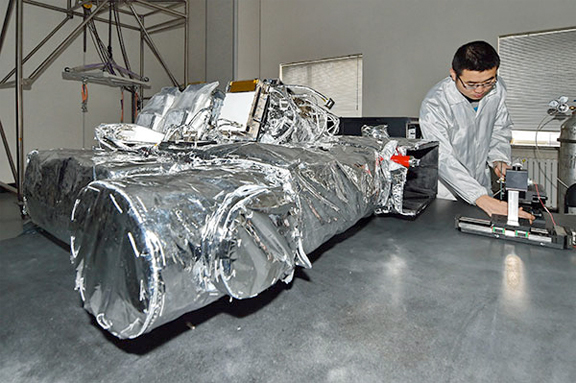 A researcher works on a satellite in Changchun, Jilin province, in December. The satellite is designed to monitor and research global carbon dioxide emissions.

China Aerospace Science and Technology Corp said it plans to launch the Tiangong 2 space laboratory and the Shenzhou XI manned spacecraft and to test-fly the Long March 5 and Long March 7 rockets. China will also launch two satellites for the domestically developed Beidou Navigation Satellite System and the Gaofen 3 for the Gaofen High-Resolution Earth Observation System. The company said in a statement on its website, "This year will see more than 20 space launches, the most missions in a single year." It added that the company will also launch a communications satellite for Belarus, marking the first time China has exported a communications satellite to Europe.

China is scheduled to launch the Tiangong 2 space laboratory in the first half of the year to test life support and space rendezvous technologies for the country's future space station. After this, the Shenzhou XI spacecraft will be launched by a Long March 2F rocket to send astronauts to and dock with the space laboratory. The nation plans to launch the core module of its space station in 2018 to test related technologies and to research engineering issues. The station will become fully operational in about 2022, according to government sources.

With these ambitious space projects proceeding well, China Aerospace Science and Technology Corp is finalizing the development of the next-generation carrier rockets. The company's China Academy of Launch Vehicle Technology is carrying out final tests on the Long March 5, the heaviest and most technologically challenging member of the nation's rocket family.

To accommodate the frequent space missions, the academy has increased its annual manufacturing capacity from a maximum of eight rockets to as many as 20 and has substantially reduced the time required to develop each new rocket.