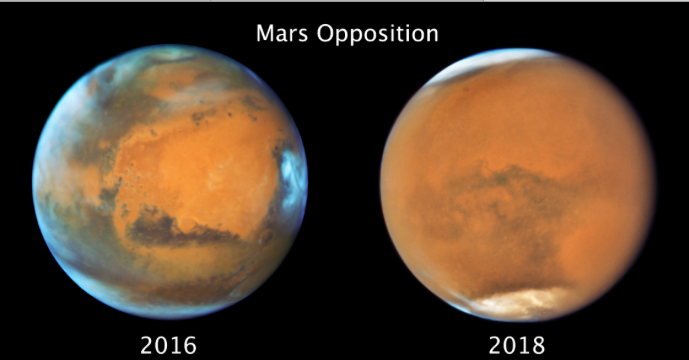 These side-by-side images of Mars, taken roughly two years apart, show very different views of the same hemisphere of Mars. Both were captured when Mars was near opposition, which occurs about every two years, when Earth’s orbit catches up to Mars’ orbit. At that time, the Sun, Earth and Mars fall in a straight line, with Mars and the Sun on “opposing” sides of Earth. The image on the left, taken on May 12, 2016, shows a clear atmosphere. The picture on the right, taken on July 18, 2018, features a global dust storm, with spring in the southern hemisphere. Credits: NASA, ESA, and STScI

It has been quite a while since Mars had come this close to Earth, fifteen years to be exact.

NASA’s Hubble Space Telescope photographed Mars on July 18, near its closest approach to Earth since 2003. The planet was observed near opposition, when the Sun, Earth and Mars are lined up, with Earth sitting in between the Sun and Mars. This proximity gives the Red Planet its brightest appearance in the night sky since the 2003 opposition.

NASA’s Hubble Space Telescope has photographed Saturn and Mars near their closest approaches to Earth in June and July 2018. It’s now summertime in Saturn’s northern hemisphere and springtime in Mars’ southern hemisphere. The Hubble images show that Earth isn’t the only planet where intense spring and summer storms wreak havoc.

The increase in sunlight in Saturn’s northern hemisphere has heated the atmosphere to trigger a large storm that is now disintegrating in Saturn’s polar region.

On Mars, a dust storm erupted in the southern hemisphere and ballooned into a global dust storm enshrouding the entire planet.

The planets were photographed near opposition, when the Sun, Earth and an outer planet are lined up, with Earth sitting in between the Sun and the outer planet. Around the time of opposition, a planet is at its closest distance to Earth for a given year. Because of the close proximity, the planet also appears brightest in the sky. 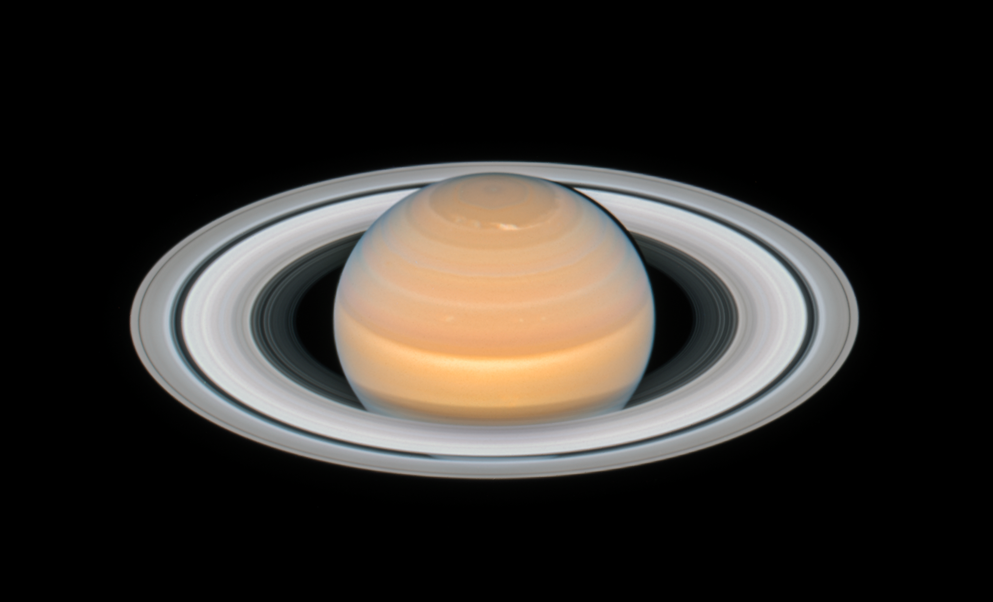 Saturn is by far the solar system’s most photogenic planet, and in this latest Hubble Space Telescope snapshot it is especially so because Saturn’s magnificent ring system is near its maximum tilt toward Earth (which was in 2017). Hubble was used to observe the planet on June 6, 2018, when Saturn was only approximately 1.36 billion miles from Earth, nearly as close to us as it ever gets. Credits: NASA, ESA, Amy Simon and the OPAL Team,

Saturn has seasonal changes caused by the planet’s 27-degree axial tilt. With summer in the northern hemisphere, the atmosphere is now more active. This may be responsible for a string of bright clouds visible near the northern polar region that are the remnants of a disintegrating storm. Small, mid-latitude puffs of clouds are also visible.

Hubble’s view also resolves a hexagonal pattern around Saturn’s north pole, a stable and persistent wind feature discovered during the Voyager flyby in 1981. The planet’s magnificent ring system is also on full display and near its maximum tilt toward Earth, which was in 2017.

Mars also has seasons, due in part to its 25-degree axial tilt, which is similar to Earth’s 23.5-degree tilt. Unlike Earth, Mars’ more elliptical orbit has a greater influence on its seasonal changes. Its closest and most distant points from the Sun vary by 19 percent (as opposed to 3 percent for Earth).

Each Martian year, moderately large dust storms cover continent-sized areas and last for weeks at a time. Global dust storms — lasting for weeks or months — tend to happen during the spring and summer in the southern hemisphere, when Mars is closest to the Sun and heating is at a maximum to generate winds.

While spacecraft now orbiting Mars are studying the storm’s behavior at lower altitudes, other Hubble observations will allow astronomers to study changes in the higher atmosphere. The combined observations will aid planetary scientists in building a better understanding of how global storms arise on the Red Planet.

Saturn’s portrait is the first image of the planet taken as part of the Outer Planet Atmospheres Legacy (OPAL) project. OPAL is helping scientists understand the atmospheric dynamics and evolution of our solar system’s gas giant planets.

The Hubble Space Telescope is a project of international cooperation between NASA and ESA (European Space Agency). NASA’s Goddard Space Flight Center in Greenbelt, Maryland, manages the telescope. The Space Telescope Science Institute (STScI) in Baltimore, Maryland, conducts Hubble science operations. STScI is operated for NASA by the Association of Universities for Research in Astronomy, in Washington, D.C.